Sport Fishing in Rwanda  : Although the fishing industry in Rwanda is not well developed, that cannot be said of the tourism sector. For a small country like Rwanda, tourism has been a success story. The government has used her meager resources to propel the county as a leading tourism destination in East and Central Africa. The success of the Tourism industry has also benefited the fishing Industry. Apart from visiting the capital Kigali, going for a wildlife safari or gorilla trekking, tourists also want to swim and fish in the countries waters. 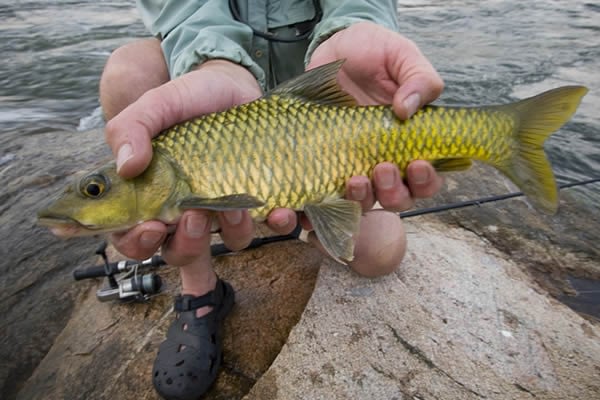 Sport Fishing in Rwanda is not highly developed because she is traditionally not a fishing country. Much of the commercial fishing is done in Lake Kivu, Lake Mugesera and Lake Muhazi. There are other rivers and lakes which also provide fishing opportunities for locals and international visitors as we shall see later. That said, aquaculture contributes to about 45% of the overall fish production in Rwanda. To fulfil the high demand for fish by her citizens, Rwanda imports fish from her neighbours Tanzania and Uganda. Most of the imported fish is re-exported to the Democratic Republic of Congo. The main fishing methods used are hooking, gill netting, the lampara method, spearing/shooting, scoop net and cast net methods. These methods are used depending on the type of catch. The fish species in Rwanda include Amphilius, Astatorechromis, Barbus, Clarias, Cyprinus, Gnathonemus, Haplochromis, Limnothrissa, Marcusenius, Mormyrus, Nile Tilapia, Synodontis, Tanganyika Sardine and Varicorthinus. The fishing is mostly done by local communities using wooden canoes. Like most countries in Africa, Rwanda has to deal with over fishing and catching of immature fish in her water bodies. Fortunately, the country has stringent policies in place to deal with culprits. Even with these fines and policies, there are other challenges that the fisheries ministry has to deal with. Fishing is not a frequent diet among Rwandans in general. The fishing methods are still rudimentary and need to be improved while pollution in some of the water bodies is alarming. There is also poor coordination among important government sectors that would propel the industry to greater heights. Finally, there is a lack of enough funding from the government and yet private investors shun the sector.  This is the same problem faces fishing in Uganda. Because of these challenges and problems, Rwanda lags behind many of her neighbours in realizing the full potential of her fishing resources.

Where to do sport Fishing in Rwanda?

Akagera national park is arguably the best place to go to go for sport fishing Rwanda. The park derives its name from river Akagera which feeds Lake Shikani and Lake Ihema.  The two lakes are arguably the best place for sport fishing in Rwanda. Apart from fish, the lakes are home to other creatures like crocodiles and hippos. The fishing spots are carefully chosen and safe from these predators. There is catch and release policy but not always followed. You can arrange to have one catch prepared for a meal.  Sport fishing around the Akagera national park requires one to acquire a fishing permit. One also needs to have their own fishing equipment. The main fishing method used around is by using hooks and the dominant species is the Tilapia. During a fishing trip, one can also go for game drives, bird watching (over 500 species) and boat cruises.

Lake Kivu is found at the border between Rwanda and DR Congo. It is the 6th largest lake in Africa. Although the lake is free of bilharzia, crocodiles and hippos, it hides one danger. The lake has dissolved methane and carbon dioxide trapped in the water. If a large earth quake or significant volcanic eruption happened, it could release the carbon dioxide into the atmosphere and suffocate millions of people. This happened in 1986 in the Lake Nyos in Cameroon. The methane gas could also cause havoc by catching fire if some event forced its release in the air.  The government of Rwanda is extracting the methane for electricity while also studying the level of risk it poses to nearby communities.

Despite all the above fears, commercial and sport fishing in Lake Kivu continues. The main species of fish here are the sardines, sambaza and ndugu. These are small species which are often caught in nets and removed by hand by the local fishermen. The local women then put the fish in a heap before weighing and selling them. If you are planning on fishing here, you need to come with your own equipment.

During your expedition, you can take part in the other activities in the lake which include swimming in the cool waters of Kivu. The beaches are great with amazing scenery and fine sand. You can choose to explore the beautiful islands by canoe or speed boat. The Nyamirudi Island is one great place to visit. It is near the town of Gisenyi and famous for coffee production. While there, you can learn about how coffee is processed locally until it becomes a final product. The island has amazing scenery and offers great views of surrounding islands. Other activities around the lake include kayaking, windsurfing and speed boat riding. If you finish all the activities in the lake you can choose to go biking along the Congo Nile trail. The Congo Nile trail passes through lake Kivu hence offering a great opportunity to go biking or cycling along the Trail.