Home » Safaris Blog » Things to do in Eastern Congo

Things to do in Eastern Congo : Apart from security and disease disability, The Democratic Republic of Congo is a one of the best tourist destinations in Africa with great tourism potential. Congo has some of the world’s most beautiful national parks that teem with a large variety of wildlife species. The national parks have stunning landscapes, endless green forest, water bodies and unique species like the elusive Okapi. If total peace prevailed, the country could easily become Africa’s number one safari destination. Given that the Democratic Republic of Congo is a large country with variety of attractions, Achieve Global Safaris only organises safari trips in the Eastern part of Congo close to Rwanda and Uganda borders. Below are some of the main tourist attraction that we offer for safaris in Congo. 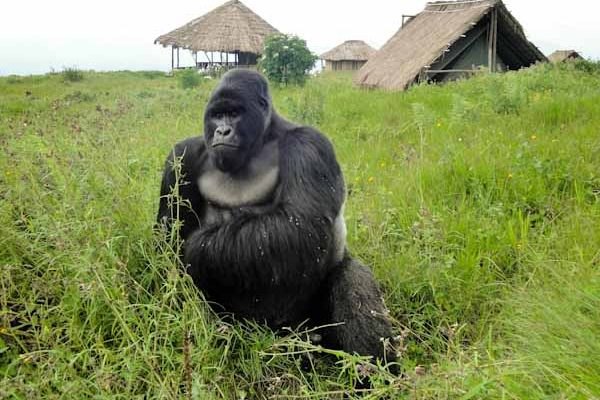 Attractions in the Eastern Congo

Mountain gorillas are arguably the most fascinating creatures in the wild. The opportunity of spotting them attracts thousands of tourists to Africa each year.

There are only three countries where mountain gorillas can be sighted – Uganda, Rwanda and the Democratic Republic of Congo. Though the gorillas look the same in all three countries, it is a different experience tracking the gorillas in each national park. Virunga national park also known as the Parc National des Virunga is the oldest park in the Albertine rift valley located in the Eastern part of the Democratic Republic of Congo and this park was formed in 1925 to protect the endangered mountain gorillas, thus Virunga national park is one of the only 3 national parks in Africa where we find the endangered mountain gorillas in the world. The park has an elevation of about 680 meters to 5,109 meters bordered by Rwanda and Uganda in the east. Virunga national park covers an area of about 8,090 square kilometres and 2 of the most active Volcanoes are located in the park including Mount Nyiragongo and Mount Nyunuragira.

Virunga national park is listed as a UNESCO world heritage site because of its rich diversity of habitats, exceptional biodiversity, stunning landscape and endemism making it one of the most beautiful places to visit in Africa. The park has more than 3,000 fauna and flora species in which more than about 300 are endemic to the Albertine rift valley including the primates. However, due to constant insecurities in the Virunga mountain forests, the park has also been listed in the “List of world heritage in Danger” since 1994 because of the civil unrest and the increase of human presence, lots of lives have been lost to Rebel attacks in the forest.

The two main activities carried out in Virunga national park are mountain gorilla trekking and Nyiragongo volcano Hiking experience. Other primates like the Golden monkeys, and elusive Okapi are likely to be available in the park however, the Virunga park has not fully exploited the primates because of insecurities involved. A mountain gorilla trekking trip in Virunga national park can be combined with a volcanoe hiking experience for about 4-5 days. Note that, unlike safari packages for Uganda or Rwanda designed by your tour company, Congo safari packages are designed by the park itself and they are responsible for the clients’ security.

Gorilla trekking in the Democratic of Republic of Congo takes place in Virunga national park bordering Uganda and Rwanda.  Gorilla trekking in Congo is the cheapest experience whereby a gorilla permits costs US $400 however due to the constant insecurities of Virunga,

Mountain Nyiragongo is located in the Democratic Republic of Congo and is one of the world’s most beautiful and active volcanoes and a large stratovolcano located near Lake Kivu at the Eastern border of Democratic Republic of Congo. It is the most active volcanoes on the African continent as one of the 8 distributed volcanic mountains whereby of these volcanic mountains including Mount Nyiragongo and Mount Nyamuragira are still active. In contrast to its neighbouring volcano, Mount Nyamuragira which is typical and very active shield volcano comparable with Mauna Loa, Nyiragongo displays the steep slopes of a stratovolcano, terraces inside the steep-walled summit which have been observed since the late-19th century.

Mount Nyiragongo is about 3,470 meters high with a 1.3 kilometre diameter summit caldera containing the world’s most active and largest lava lake and is infamous for its extremely fluid lava that runs as water when the lava lake drains. It is notorious for its lava lake and producing lateral eruptions with extremely fluid, fast-moving lava flows that repeatedly devastated areas around the volcano, such as the Goma disaster on January 2002, when a lava flow destroyed much of the city’s commercial centre and prompted over 200,000 people to flee and claiming about 250 lives. Over years, Mount Nyiragongo has experienced severe eruption and the last eruption happened on 22nd May 2021where lava flows extended to the city of Goma displacing many people and there is no confirmation as to whether the lava will return.

Hiking Mount Nyiragongo is one of the main tourist destination in Virunga national park and has attracted quite large numbers of visitors to the Democratic Republic of Congo. It is the only place in Africa where visitors are allowed to go and see a lava lake up close. Hiking Nyiragongo is one of the most interesting experiences where you hike up the mountain and spend a night for great views of the boiling lake in the night and hike down the next day with great memories of the boing lava. Mount Nyiragongo hike safaris were opened to tourism in 2014 by Virunga national park authorities and today there are Virunga packages whereby mountain gorilla trekking is combined with hiking the Nyiragongo volcano. Visitors looking for a unique and once in a lifetime mountain hiking adventure are recommended to visit and hike Mount Nyiragongo.

The Kahuzi-Biega National Park was named after the mountains Kahuzi and Biega. The park is located in the south eastern part of Congo and in the south of Lake Kivu.  Kahuzi Biega national park covers an area of about 6,000 square kilometres whereby Mount Kahuzi lying at 3,308 meters and Mount Biega at 2790 meters, the two mountains are only connected by a narrow strip of the forest. The park is mainly dense with lowland rainforests, Afromontane forests, bamboo forests and small areas of sub-alpine prairies.

Kahuzi-Biega national park is a UNESCO World Heritage Site because of its existence of the famous for habituated Lowland gorillas. The main attraction to the park are the eastern Lowland gorillas and it is the only place in the world where you can track these gorillas. The eastern lowland gorillas have been threatened by poaching but efforts by Congo government, conservationists and other well-wishers have promoted conservation of the primates and now there are increased numbers of the lowland gorillas. Unlike mountain gorillas, tracking eastern lowland gorillas is relatively easier. Gorilla Permits to Kahuzi Biega can be got on short notice and the need to trek long distances on steep mountain slopes is avoided. Apart from gorillas, visitors on a Congo safari can go to spot elephants, chimpanzee and several species of antelope.

Kahuzi Biega national park is accessed from Bukavu which is the main town near the park. Other activities to do in the park include hiking to the any of the several extinct volcanoes in the park, birdwatching, nature walks to waterfalls.

Senkwekwe gorilla orphanage is one of the most interesting places to be in the Democratic Republic of Congo. This is the only home to orphaned mountain gorillas in the Africa opened in 2010 and has become known as the only place in the world were mountain gorillas have lived successful in captivity.

This centre is located at the headquarters of Virunga National Park near Mikeno lodge and it was named after the great silverback gorilla “Senkwekwe” who headed gorilla family called Rugendo during a great massacre of some members in 2007 by rebel forces hiding in the forest national park. The idea of the gorilla orphanage centre came up when two orphaned gorillas (Ndakasi and Ndezi) who survived the massacre were rescued and there was no suitable place to take proper care of them. A decision was made to set up a centre to cater for young mountain gorillas that have lost their parents due to poaching, animal trafficking or fighting between government forces and rebels in the park area. Under the leadership of Andre Bauma and the management of Virunga National Park, the Senkwekwe Gorilla Orphanage centre offers a rare opportunity for primate lovers to contribute directly to a worthwhile conservation effort while also observing mountain gorillas interact closely with humans. The Gorilla Doctors who are a team of Veterinary doctors working on gorilla conservation projects in Africa and caretaker staff at the centre help protect and raise the orphans among which include treating mountain gorillas in the wild.

Management of a long-term captive care facility, with an emphasis on rehabilitation and conservation education, requires the resources (financial and technical) of multiple partners. For this reason, the CRPL welcomed collaboration with Non-Governmental Organizations to assist with the management and development of the project. In 2006, Coopera, a Spanish NGO arrived to provide the needed technical and management support. In 2016, the Ivan Carter Wildlife Conservation Alliance (ICWCA) became our core partner, and, in that same year, the Mountain Gorilla Veterinary Project (MGVP) officially joined the team in taking charge of the veterinary department.

CRPL is an important conservation tool for primates in the Democratic republic of Congo and the rehabilitation centre is currently taking care after about 92 chimpanzees and about 108 monkeys of 13 different species, all of them victims of the pet trade and/or poaching. Without centres like ours no confiscation of captive animals would be possible, which also makes us essential for law enforcement.

Lwiro chimpanzee sanctuary are strategically situated only 4 km away from Kahuzi-Biega National Park defined by the IUCN as the world’s third most important site for the conservation of the Eastern Chimpanzee, makes Lwiro the ideal location for chimpanzee rehabilitation, local conservation education, and outreach. Our chimpanzees and monkeys have become ambassadors for their wild cousins.