Threats to mountain gorillas : Though thousands of people folk Uganda, Rwanda and the Democratic republic of Congo to get a chance to see the mountain gorillas in a bid to conserve them as they enjoy them, mountain gorillas still suffer a number of threats in the wild that affect their survival and well being. 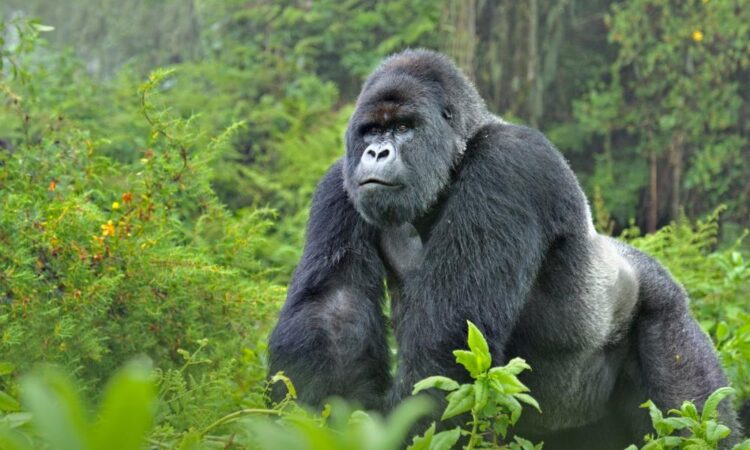 All wild animals are threaten by diseases they catch in the wild. Usually because they are wild animals they will catch a disease and recover from it naturally. However sometimes these animals catch rare disease that affect their wellbeing that they don’t recover from them. Some die because of the illness in most cases, while other become incapacitated and die afterwards.

Poaching is the illegal killing of animals for human gain. In the East African regions humans kill animals for various reasons including cultural rituals, meat, to chase them away from the area, to show strength among other things. Though they are laws to protect animals against poaching, poaching continues to happen in most East African regions leading to lots of wild life losses. In 2020 a gorilla was killed by some locals who were apprehended but still the animal had already.

The fight against poaching continues and we can only hope that in the near future this deadly habit will stop.

Deforestation is cutting down of trees in forests by humans to create space for human activities. Usually, people will cut down trees to create land for cultivation or settlement. However, because gorillas live in forested areas its very important that the forest are kept  because they are the habitats of the gorillas; literally without forests there are no mountain gorillas.

Due to climate change, the natural vegetation and conditions in the gorilla habitats has changed and this is detrimental to their wellbeing. The conditions they are used to or conditions that are favourable to them no longer there. Also climate change has affected food availability which in turn has led to scarcity of food for the gorillas. And we all know without food, one’s survival is actually threatened, if not greatly affected.

Fights between gorilla families for various reasons have also led to the loss of many gorilla lives. When gorillas fight, usually one dies in the fight and this has led to a great reduction in the number of gorillas in the wild.

Currently the world has about 880 gorillas living in Uganda, Rwanda and the Democratic Republic of Congo. They live in four national parks which are Bwindi National Park and Mgahinga National park is Uganda, Volcanoes National Park in Rwanda and Virunga National Park in the DRC. Most of these gorillas are available to be trekked and mountain gorilla trekking fees for each country are different. In Uganda mountain trekking is at 700 USD, In Uganda its at USD 1500 and in the DRC its at 400 USD. Mountain gorilla trekking happens all year round in all three countries.