western Uganda is one of the regions in the Republic of Uganda, the pearl of Africa. A little trip to the western. interesting fact, records have it that we have four regions in Uganda although, in the west, we have the southwestern districts (hearsay!). Speaking of districts,  the western region has twenty-six districts like Sheema, the famous Kabale, Ntugamo, Rukungiri, Kasese, Mbarara the capital of the west inter alia. On top of having these districts, the western region of Uganda is occupied with a variety of vibrant welcoming tribes like the baking banyankole, bafumbira, bakonjo, batooro, bahima, banyoro among others. 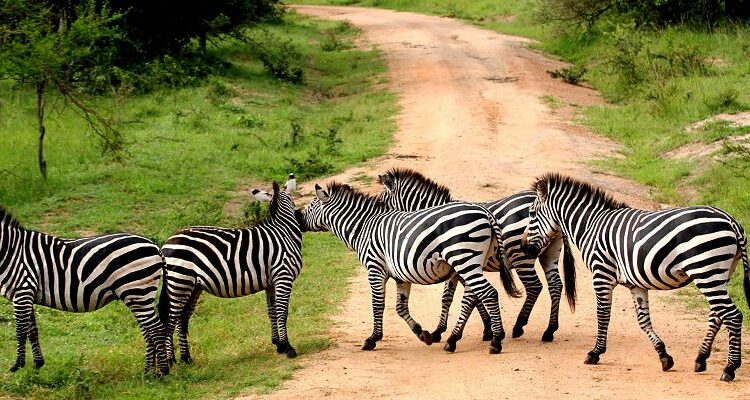 Stepping away from the people and tribes and just marvel at the top five attractions that you’ll find as you explore the west. We have; Lake Mburo National Park, Lake Bunyonyi, Kazinga Channel, Bwindi Impenetrable ,and  , the Queen Elizabeth National Park.

Bwindi Impenetrable forest. This is a large (if not the largest) primeval Forest located in south-western Uganda in Kanungu district at the edge of the Albertine Rift. The best time to see it is between June and August and December to add a little spice to the festive season. There are activities like gorilla trekking and affordable and secure accommodation. This magnificent attraction is known for its outstanding biodiversity of over 100 species of trees and ferns together with animals like Elephants, duikers, buffaloes, golden cats, bush pigs, and many others. What makes this attraction unique, is the fact that it houses the endangered gorillas, such a rarity!

Lake Mburo National Park. Located in Kiruhura District, this is the smallest national game park and the easiest to access from the capital city if you’re looking at short distances to travel to. It is graced with more than six sixty-eight male species including zebras, impalas, warthogs, leopards, hyenas, and, rhinos to mention but a few. The best time to see this attraction is between June and August and December all through to February which is magnificent to explore the park. What I find unique about this attraction is the fact that there are no elephants or lions, which makes it ideal to walk for those that love to walk on top of it being more accessible from the capital city!

Lake Bunyonyi. This is a south-western lake found between kkoroand Kabale and close to the Rwandan border. Explore Echuya Forest while here and see for yourself what it’s like to breathe in fresh air from the lake and the Forest as well. This lake is known to be the deepest crater lake in Uganda and Africa at large and its lush green terraced hills are punctuated with a plethora of over 200 bird species. The best time to see this place is all year round! There is no specific time to see it…pass by!

Kazinga Channel. This is a 32-kilometer wide long channel in Uganda that links Lake Edward and Lake George located in Kaseethe se district. It is a dominant feature of the Queen Elizabeth National park.

The best time to see this is during the dry season when the channel becomes an oasis when it attracts more animals. The best activity here is boat riding and it’ll give you value for money! Bird spotting is the most unique feature this attraction possesses as it is home to over 58 bird species.

Queen Elizabeth National Park. Is the largest national park in Uganda…don’t believe me? Visit the place around January to February as it isis located in south-western Uganda and has activities like bird watching, game drives, boat trips, and what makes it unique is its selection of wildlife, blissful!