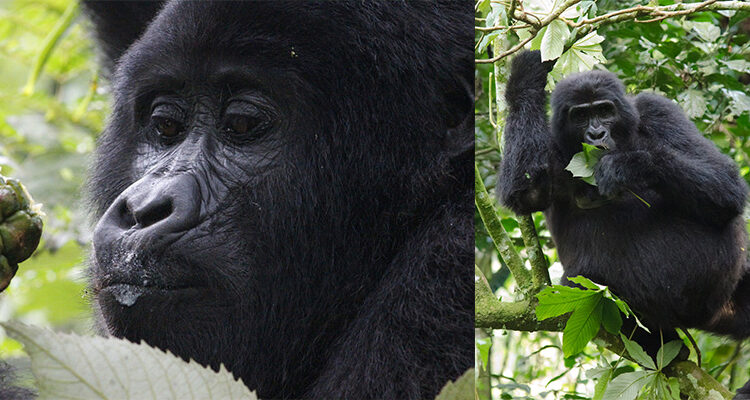 Like most herbivorous animals the mountain gorillas usually feed during the day and rest during the night. The silverback will hunt for feeding locations – definitely locations with abundance of food and then lead the rest of the group to the feeding location where they will feed.

Mountain gorillas are some of the famous primates in the world, Africa and East Africa. They are huge, intriguing and intelligent just like humans, no wonder they share about 90% of their DNA with humans.

Though these primates are famous, they are endangered as per the IUCN, especially because of human activities that keep destroying their habitat and leaving them homeless.

The mountain gorilla habitats are mountainous forests. These apes live in high altitudes of these forested mountains or mountainous forests. These conditions are very particular to their survival; that’s why they can’t survive in other habitats. The mountain gorillas are some of the wildlife with a particular habitat, they cannot live or survive in any other habitat.

The mountain gorillas live in families or groups with females and young ones led by a dominant male known as a silverback. These groups consist of about 10 to 15 members on average but can be more or less depending on the conditions. The silverback as a leader decide the feeding locations of the group, sleeping nests, play areas etc, anything of leading the group falls on the silverback.

On the other hand the females keep the group together by nurture and caring for all the group members especially the young ones. The young ones usually spend their time playing and feeding. The females will give birth to one baby gorilla at a time in a period of two years.

The males are also tasked with defending the group so, they will always fight for the group members in all circumstances, sometimes up to the point of death.

Mountain gorilla trekking experience cost 1500 USD in Rwanda, 700 USD in Uganda and 400 USD in the Democratic republic of Congo.