What do Mountain Gorillas Eat? 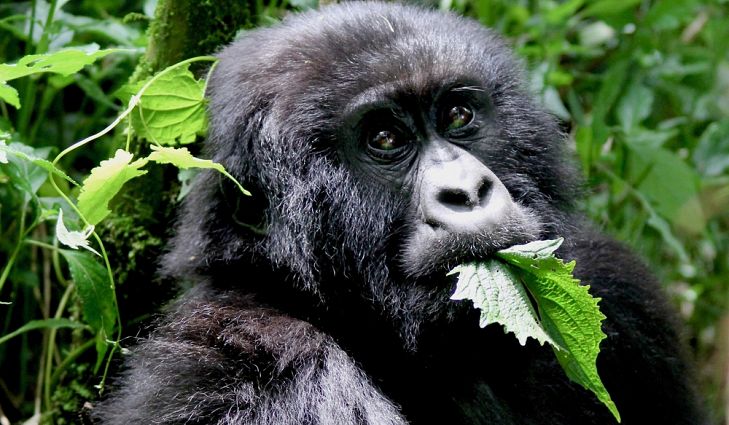 The mountain gorillas are share about 98% of their DNA with human beings so they are able to do things that humans and have similar behaviours like the humans which include expressing emotions, using tooling among other behaviours. These animals also are able to suffer from the same diseases that affect humans and like humans they are also social beings and they live in groups that are known as mountain gorilla families.

Mountain gorillas are herbivores and feed on a vegetarian diet. They feed majorly on stems, fruits, bamboo shoots and some shrubs. However in some areas studies have shown that these gorillas can also feed on some insects and larvae when food is scarce.

It’s because of their diet that the mountain gorillas live in forested areas, for them to get food. They feed normally once or twice a day and it’s the silverback you leads the entire group to the feeding place and the silverback always eats first.

A silverback is the dominant male in the mountain gorilla group. A mountain gorilla group normally consists of 3 to 20 individuals but some cases you may find they are more because of different circumstances. The dominant male, who is the silverback, will normally be or lead a group will females and infants; rarely do you find other males in the group unless they are children of the silverback.

So during feeding because the silverback is the head, he will eat first; but also if something is not good for the group, he will taste it first and save the rest of the individuals.

Volcanoes National Park in Rwanda also has a relatively high number of mountain gorillas with about 300 individuals that are spread in the 10 families in the virunga ranges in Rwanda.

Mgahinga National Park in Uganda has the fewest number of mountain gorillas will less than 50 individuals living in one family in the park. This family lives in the virunga ranges in Uganda.

In all these countries you are required to purchase you mountain gorilla permit at least 3 months in advance and mountain gorilla trekking is only open to person able to trek and 15 years of age and above.

At the writing of this article, Uganda and Rwanda have offered permit discounts for a given period of time so if you have been wanting to have a mountain gorilla trip, you should be sure to take advantage of the offered discounts. What do Mountain Gorillas Eat?