Home » Safaris Blog » Where are the Rhinos found in Uganda?

Where are the Rhinos found in Uganda?  The Rhinos are one of the most tourist attractions in Uganda, which have led to a big development in the tourism industry of the country. Therefore, tourists who have an interest in participating in Rhino trekking activities while in Uganda can best do so from the Zia Rhino sanctuary. This is the only place where one can capture a beautiful view of Rhinos by foot in a short distance range and it is one of the best wildlife conservation projects in the country. 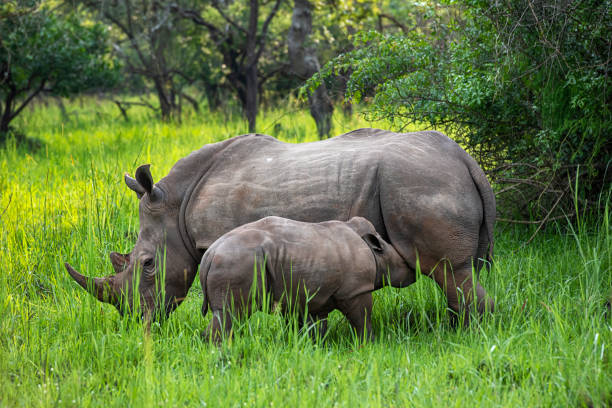 The Ziwa Rhino sanctuary is located in in the central region of Uganda in Nakasongola district, which is about 164 square kilometers from Kampala. This rhino sanctuary was established in 2005 co-operating with the Uganda wildlife Authority with an aim of increasing the number of Rhinos in the country and protecting them in their natural habitats and to manage the Rhino fund. The Rhino sanctuary covers an area of about 70 square kilometers and it is enclosed with 2-meter high electric fences in order to reduce poaching activities and protect the sanctuary from other predators. More so, there is an estimated number of over 78 park rangers and security guards within the Ziwa rhino sanctuary whose main role is to safe guard and maintain a 24-hour surveillance on the Rhinos, Where are the Rhinos found in Uganda?.

Apart from the Rhinos, this sanctuary is also known to be a home of over 40 mammal species such as; lions, elephants, leopards, antelopes, crocodiles, hippos, monkeys and 300 bird species such as the rare shoebill stork.

The Ziwa Rhino sanctuary started conserving Rhinos with only six of them whereby two of the Rhinos were translocated Disney animal’s kingdom, which is found in the United States of America in Florida, and the other four were transferred from the Solio ranch in Kenya. However, today the number of the Rhinos has increased to 22 giving tourists great and an enjoyable experience during their Rhino trekking safari in Uganda. While trekking Rhinos, tourists always get a chance to sight see a number of rhinos grazing within the savannah grasslands in the sanctuary.

Other things to do while in Ziwa Rhino Sanctuary.

Paying a visit to the Ziwa Rhino sanctuary has become a priority on everyone’s bucket list while on his or her safari in Uganda. Apart from rhino trekking, tourists can combine it with other activities while in the sanctuary. In addition, these include;

Tourists in the Ziwa Rhino sanctuary who happen to be bird lovers will also get opportunities to sight see at a variety of bird species as they take guided nature walks through the sanctuary. Tourists will move towards the swampy areas, savanna plains and woodlands where they can get a chance to spot over 350 bird species such as; the rare shoebill stork, the African Fish Eagle, African black headed oriole, African Citril, African crowned eagle, Blue spotted dove, Broad billed roller, Bronze manikini, Brown backed srub robin, brown throated wattle eye, Cardinal woodpecker, giant Abdim’s stork, white crested turaco, speckled breasted woodpecker, booted eagle and many others.

Tourists visiting in the Ziwa Rhino sanctuary can also opt to go for guided nature walks where they get a view of the great biodiversity with in the sanctuary and also enjoy the beautiful scenery of the surrounding bushes and the green tropical vegetation and they look at mammal species moving around like; Grey duiker, waterbucks, bush duiker, bush bucks, reedbuck, oribi, hartbest, mongoose. More so, there are also primate species like; black colobus monkeys, vervet monkeys, white colobus monkeys and there are chances of spotting large lizards, pythons, butterfly species and insects roaming within the sanctuary. During these guided nature walks, tourists are always accompanied with the park rangers/ guides whose role is to ensure the safety of both tourists and the animals and lead the individuals through the trails, Where are the Rhinos found in Uganda?

How to get to Ziwa Rhino Sanctuary in Uganda.

Tourists planning to track Rhinos in Uganda can only do so from the Ziwa Rhino sanctuary, which is situated 176 kilometers from Kampala along the Kampala Gulu- highway. Therefore, tourists planning to travel to the sanctuary can opt to branch off from Nakitoma trading centre, which is about 7.3 kilometers away from the sanctuary, and this makes travelers to continue and take a drive, which will go for about 14 minutes from the trading centre to the Ziwa rhino sanctuary. Or tourists on a safari in Murchison falls national park but also have a desire to visit the ziwa rhino sanctuary can decide to take a drive which will take about 2 and a half hours to reach the sanctuary due to the fact that Murchison falls national park is just 125 kilometers away.

For any more inquires about where to find Rhinos in Uganda, contact our trusted tour operators and Book with our travel and tours companies such as Achieve Global safaris and Explore Tours Rwanda, which offer you with the best Uganda tour packages while on your safari in Uganda.