Wildlife in Uganda is the top tourist attractions that most of tourists travel to the country to be able to view and explore the different species. Uganda is known as a wildlife hub, for its wide range of wild animals that are spread across the country’s regions in game reserves and national parks. Every year the country receives over 10,000 tourists coming to the country to see these animals as they live in their natural habitats. 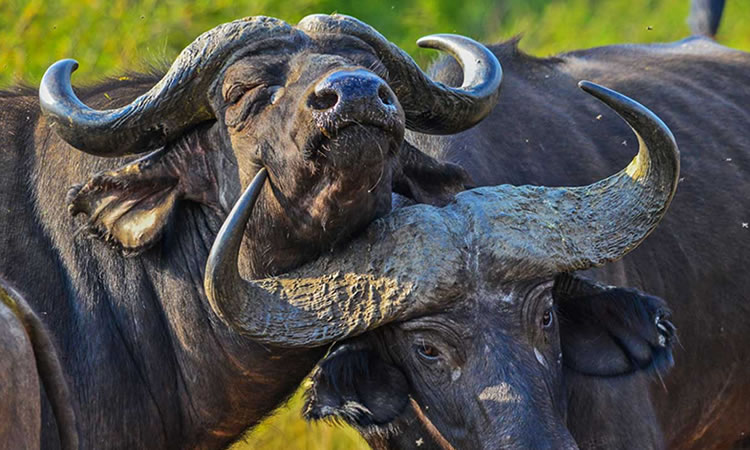 Uganda has ten National parks, with over 6 in the western part of the country and the most visited parks recently being Bwindi Impenetrable National Park and Queen Elizabeth National Park. All the ten parks are habitats for either or both primates and other wild animals including the big five animals.

When you visit the country for your wildlife safari in Uganda, you will have a variety of animals to see in whatever park you choose to go to, and below we list some of the animals you will see in the different parks that are in the country.

The park is also home to other nine primate species, animals and over 200 butterfly species. These include – forest duikers, black-and-white colobus,  l’Hoest monkeys, forest elephants among others.

Also known as the capital of primates, making it the park with the highest number of primates in the region and the country, this park is home to over 5000 chimpanzees that live in Kibale National Park rain forest with some of these chimpanzees are habituated and are trekked throughout the year by numerous tourists. The forest is also home to 12 other primates species that include: – olive baboons, black-and-white colobus, l’Hoest and blue monkeys among others.

Queen Elizabeth National Park, boasts a wildlife diversity of over 110 wild animals in the park including predators and mammals not forgetting primates and over 600 bird species. This park is also among the other parks with some of the animals from the big five categories. The animals in the park include:- lions with tree climbing lions in Ishasha, cape buffalos, elephants, leopards, impalas, kobs, antelopes, warthogs, among others. The park also has chimpanzees on the northern edge of the park in Kyambura gorge.

When you visit the park, you’re able to see all these animals and more.

This is the oldest and largest national park in the country and is mainly known for its iconic Murchison falls that are on the Victoria Nile between Lake Kyoga and Lake Albert.

Murchison Falls National Park is among the park with some of the big five animals and the Rhinos which among the big, are in a sanctuary a few kilometres away from the park, making it the Murchison falls National the place to be for all the big five animals in Uganda. Thus the animals in Murchison Falls National Park include: – lions, leopards, elephants, cape buffalos, zebras, giraffes, impalas, etc. Just close to the park in the south is Budongo forest that is home to chimpanzees and monkeys.

The park is home to over 300 bird species that birders are delighted to watch on birding sprees, the most famous bird being the shoe bill stork that is always along the Nile banks.

Lake Mburo National Park though this is a small park it has some of the rarest animals that cannot be found in some parts of the country. The animals include Burchell’s Zebras, Impalas, sitatunga antelope, herds of eland, topi, oribi, Bohor reedbuck, etc.

The park also has several crocodiles and hippos living in the lake that you see normally on a boat cruise.

Kidepo Valley National Park is the wildlife richest park in the country, though located so far in the north; this park has the biggest number of wild animals in the country. People visiting this park normally travel over 10 hours by road or take a domestic flight from Entebbe International airport which is about 2 hours. The animals in the park including but not limited to cheetahs, elephants, lion, cape buffalos, leopard, Burchell’s zebra, Rothschild’s giraffe, black-backed jackal, and many others.