Wildlife species in Rwanda  : Rwanda is blessed with a number attractions and among the different attractions that have attracted the tourists to visit the country, the wildlife species are the most rewarding from the endangered mountain gorillas that can be seen when you visit volcanoes national park, the big five animals in Rwanda to the chimpanzees and the golden monkeys among other wildlife species that you will get to see when you visit Akagera national park all of which have a number of rewarding features that will make your Rwanda safari quite memorable and worthy of all the coins you spend. 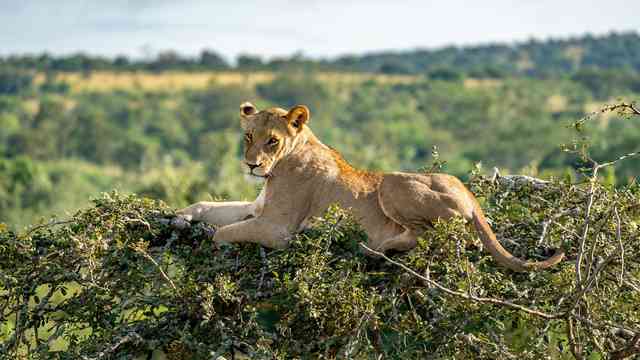 Participate in gorilla trekking in volcanoes national park to understand more about the endangered mountain gorillas that can only be found in volcanoes national park, Mgahinga national park and Virunga national park. While spending one hour with the gorillas, you will have the chance to watch a number of beautiful scenery like the different bird species, a number of primate species like the black and white colobus monkey, golden monkeys, Mona monkey and you will see rewarding views of the twins lakes of Burera and Ruhondo as you hike the Virunga mountains in Rwanda namely mount muhabura, mount gahinga, mount Sabyinyo and mount karisimbi in order to get to the habituated gorilla families in Rwanda. Once you get the gorillas, you will spend one hour observing their rewarding features like how they exit with one another.

It should be noted that every gorilla family has a dominant silverback who is the overall seer of the group and is responsible for taking care of the group and protecting it against any internal and external uprisings, another interesting feature about the silverback is the fact that they have all the mating rights with the adult females of the family and mating is initiated by the females whereby they have to first entice the male in order for the silverback to mate with the females and many other interesting features if the species that can be seen when you participate in gorilla trekking in volcanoes national park.

Track the chimpanzees in Nyungwe national park to understand more about the primate species in the wild for an amazing experience. Chimpanzee trekking in the park can be carried out in Nyungwe national park the primate hub of Rwanda where you will see a number of primate species making it the number one primate tracking destination in Rwanda. Just like gorilla trekking where you spend time with the chimpanzees to understand more about the rewarding primate species in the park. Some of the most memorable features you will get to see about the species include their strength as compared to other primates like gorillas because it has been recorded in several encounters, gorillas especially infants have been seen being killed by the chimpanzees which has raised questions on how strong the chimpanzees are. Other primate species that can be visited include the golden monkeys an endangered group of species that are only endemic to the Albertine rift and these have rewarding features that you will also enjoy once you visit volcanoes national therefore during your Rwanda safari do not forget to carry your camera to take pictures of the primate species and other rewarding views for a memorable safari.

The big five animals in Rwanda should also not miss out among the different attractions you will get to see when you participate in your Rwanda safari.  The big five animals in Rwanda can only be tracked in Akagera national park where you can take part in a number of activities like the morning game drives where you will see the rhinos, buffalos and the elephants grazing within the plains of the park and during the evening game drives you will also get to see the lions and the leopard hunting for prey.