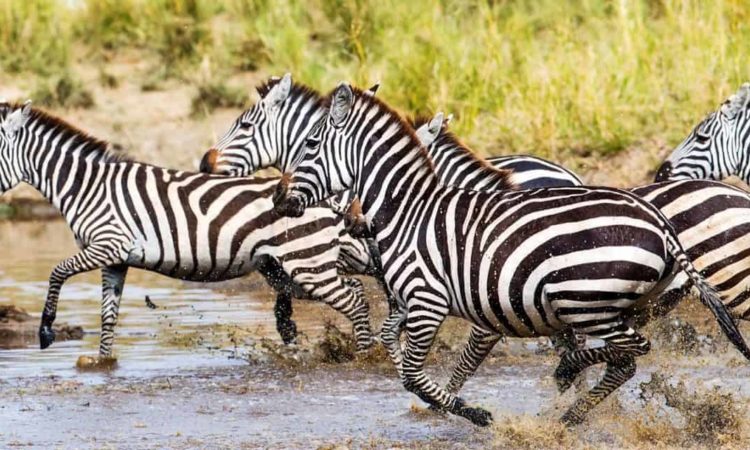 Zebras are large mammals mainly known for their exceptional pattern of black and white stripes and are a medley found in Uganda as key wildlife features. In Uganda, they are one of the most common species you will find on a Uganda Wildlife Safari. These animals are found in natural habitats in sub-Saharan parts of Africa mostly East and Southern Africa. These undomesticated large horses appear in three distinctive species that is the Mountain Zebra, Plains Zebra, and the Imperial Zebra. The Plain Zebra is the commonest species you expect to find on any of your wildlife safaris as the Imperial and Mountain Zebras are rare and have a low population hence listed as endangered species.

The zebra stripes though look similar the patterns are unique to each individual. The Zebra is heavy weighing between 300 – 450 kilograms; the males heavier than the females. The Zebras have distinctive manes of short erect hair on their heads that run all the way through the back to the tail. Their long necks enable them to effortlessly reach for grass as they feed and they chew strong grass fibers with their matching incisors.

The zebra’s running abilities of about 40 km per hour are enhanced by their long slim legs with narrow hooves and one toe on each foot which they use to walk. These animals also have impeccable eyesight and hearing abilities that help them to sense danger from afar and run.  The Zebras communicate with unique facial expressions and sounds that include barking, snorting or sniffing sounds; their ears are unique in a way that they can turn in all directions with is a huge compliment to the way the zebras communicate.

Zebra Herds and groups are led by males who are strong and fierce; these males normally have mating rights over the females in the group. The males come from bachelor herds well as the females are normally related to each other with females that have been in the group longer, being supreme over the other females. The Lead males often offer protection to the members of the groups especially their offsprings and the females. The Zebras are very affectionate with each other in the groups and herds, with most of them found cleaning and brushing another’s coat using their teeth and lips.

These mammals are diurnal animals grazing and activity during the day, and sleeping at night. As they sleep one Zebra will stay up to watch and guard against predators; because the animals spend their nights on short pastures that make them easy prey to their predators.

Zebras are not territorial; they will move from territory to territory in a season in such for more fertile pastures or runway from predators. During migration or movements for any reason the smaller groups will come together with the bachelor herds to form larger herds; as they move the lead male will keep at the back or front to protect the group members from predators.

Because they feed on grass, they are constantly in open grasslands, savannahs and plains where they are able to graze on grass all through the seasons.

A female zebra will be pregnant for about 10 months or slightly more and will give birth to one foal at a time with a mane and the distinctive black and white stripes though their coats are normally brown become entirely black at 4 – 5 months. The young will stand and begin to suckle the mother in about 10 – 15 mins after birth. The young one will breastfeed up to 11 or 14 months but able to eat grass at 1 week. The foals are normally with their mothers in their first years of life and the female foals stay with their mothers for a long time or life as the males join the all-male herds at 3 years of age.

The females reach sexual maturity at 3 or 4 years and the males reach sexual maturity at 5 or 6 years. Males in a herd will put on a strong fight with other males by biting and kicking each other as they rear up on the behind limbs; all this to earn the right mate with a female. Males in bachelor herds will always fight to overpower the lead males so that they can mate with the females in the herd.  Some females can tend to bond with a particular male for a lifetime as other mates with any male in progression.

Zebras fight off predators by gathering together in a mass herd that merges their stripes and this makes it hard for a predator to single out one animal. When a zebra is wounded or hurt by a predator the rest of the individuals will circle the hurt animal in fits to chase away the predators. They also have powerful kicks that severely injure the predators.

Zebras also run from their predators in zig-zag motions that confuse the predator and they run at a speed of 40 km per hour. The major predators of the zebras are Lions, wild dogs, leopards and Hyenas among others.

Zebras are commonly associate with other animals especially the wildebeest and the impalas, baboons, giraffes.

You can find the Zebras in East Africa in Uganda, Kenya, and Tanzania; in these parks