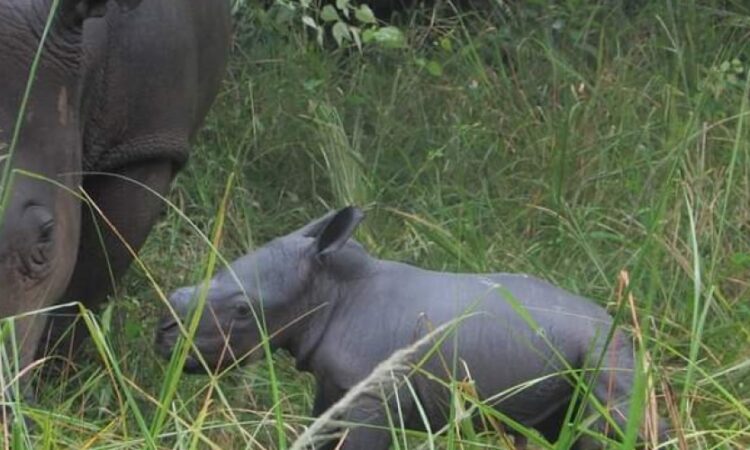 Uganda wildlife Authority announced the birth of this Rhino on its social media platforms with a statement that read in part “Good news from Ziwa Rhino Sanctuary. Kori, one of the oldest female Rhino has given birth to a male calf.”

The News of the birth of this Rhino is really a breath of fresh air after all the controversial press that has been hovering over the sanctuary in the past days. The sanctuary was in the News for some time over land disputes that led to its temporarily closure before it was reopened again to the public for tourist activities.

Ziwa Rhino sanctuary is the only place in Uganda where you can view and trek these big five family animals. Rhinos in Uganda had been extinct for several years until they were reintroduced to the country by the Rhino Fund Uganda together with the Uganda Wildlife Authority.

The sanctuary covers a total area of 70 sq kilometers in Nakitoma Nakasongola District. It was established in 2002 with the reintroduction of southern white rhinos that were donated to Uganda by the European Union, Kenya and Disney world. Since then the number of Rhinos has continued to grow to date making 23 Rhinos.

The sanctuary is very popular among tourists because of course the Rhinos but also because of the shoebill stork that live in the sanctuary’s swampy areas. The Ziwa Rhino sanctuary was created for rhinos, it’s also home to several other animals like zebras, antelopes, waterbucks, kobs, bushbucks, duikers and impalas among others.

Most people visit the sanctuary for Rhino trekking, where they take long walks in the sanctuary to find the rhinos and spend time observing them as they go about their daily life.

The sanctuary also has other activities that can be done at the sanctuary that include but not limited to:-

These are only but a few of the several activities done at the Rhino sanctuary.

The sanctuary is open to visitors all throughout the year and a trip to the sanctuary can be combined with a Murchison falls safari or a kidepo safari.