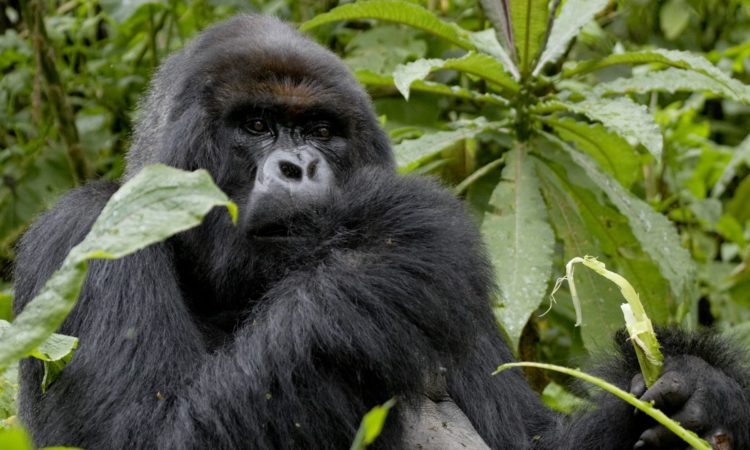 Mountain gorillas are listed as endangered species on the IUCN red list because of their quite small population in the world. The mountain gorillas that are also known as Gorilla Beringei Beringei are subspecies of the Eastern Gorilla beringeri and their total number is estimated to be slightly above 1000 individuals alive currently in the entire world. Mountain gorillas are known to be social animals living in closely related groups that are led by a male; the groups normally have related females and young ones with a dominant male who is called a silverback and sometimes other males not more than five called black back; these are submitted to the silverback and they just help the silverback and don’t mate with the females in the group. The silverback being the main leader in the group has privileges like always eating first and mating with the females in the group among other things.

A mountain gorilla group can have as low as 5 members to as many as 30 members though it’s been observed that large groups normally break out especially if the group has many males at ago. The males in the groups normally the silverback, decides where the group will, sleep, play etc and he will also protect this group from all harm and danger even when it means he dies fighting.

Though they are huge and look intimidating the mountain gorillas are usually very gentle species useless threatened they will charge at you and if they are really agitated they fight you trampling on you fiercely most times leaving you for dead.

They use special sounds for communication and they are nearly as intelligent as humans able to use tools and do some things that humans do not to mention mountain gorillas share about 90% of their DNA with humans.

The mountain gorillas live in high altitudes so their survival is greatly inclined to their natural habitat which is a mountainous forest hence they cannot survive in captivity so this entire population is found in mountainous forests cut across Uganda, Rwanda and DRC.

You should know though that this mountain gorilla trekking experience is always on high demand so you will need to acquire a trekking permit at least 3 months in advance for you to secure your trekking spot.

On a trekking experience persons are grouped in groups of 8 people that trek together to see one mountain gorilla family for one hour. The gorilla trekking rules and guidelines are normally communicated at a briefing before the trekking experience and they include but not limited to:-

Mountain gorillas’ habituation is only done in Uganda’s Bwindi National park at a fee of USD 1500 and is done under a wildlife specialist supervisor. The rules and guidelines of this experience are the same as those of the trekking experience.