For more than enough the nation has lived under the rags of not having the national airline-Uganda Airlines, but truly when everything seems to be in a pause mode, the long waited returns back on the scene, the Uganda airlines. And no offence if the dance troupe was appropriate for the ceremony that was held at Entebbe in the name of receiving the new and very first national carrier after a long time. 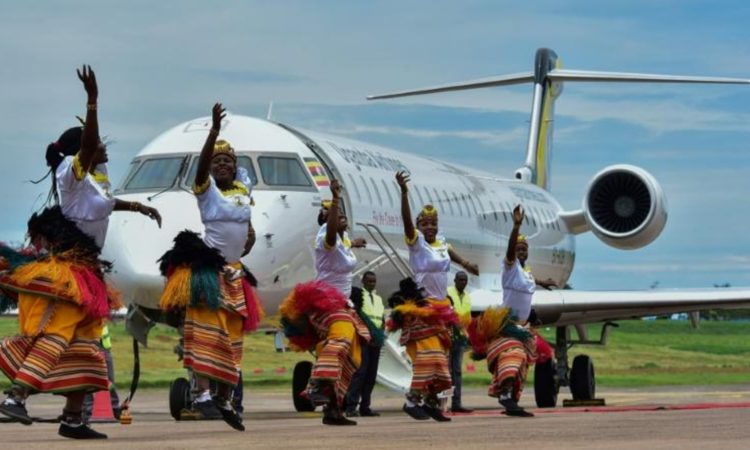 The ceremony was attended by delegates from different civil offices and the president himself, H.E. Yoweri Kaguta Museveni, could not hold back on the invitation. Uganda gladly received the new regional jet, on 23rd April 2019, part of the four that were bid for last year from the Canadian manufacturer, bombardier. The new CRJ900 carrier is capable to carry a capacity of about 90 passengers per flight. The bombardier CRJ900 landed from the Ugandan skies with the national colors flaunted on it and the symbol of the crane on it, surely, it was Ugandan.
It had taken long enough when the national airline had stopped operation and it can to total collapse in 2014. And it is said that the collapse of Uganda airline was due to corruption and mismanagement by the company’s political appointees in 2001. And the matter of mismanagement of the airline, resurfaced during the meeting at Entebbe international airport when receiving the new Bombardier CRJ900, however, it was counterattacked by the CEO of Uganda airlines, Ephraim bagenda, “we are praying that not to ever happen again” he said.

The minister of works and transport, Monica azuba ntege showed her excitement for the arrival of the first national carrier, “we are very happy that what we started months back to restart the national carrier has begun bearing fruits” she said at the ceremony that was held at Entebbe. She supplemented that, two more planes where purchased from bombardier, a Canadian manufacturer, and they are expected to arrive in July and September this year, 2019. The European aerospace giant airbus will also deliver two big long haul planes in 2020 or 2021.
The CEO of Uganda air lines elucidated that the first flights on the revived national carrier would take place in July if the 90 days certification happens to be done with. He continued that “the 90 days certification will include demonstrations to the civil aviation authority (CAA) of Uganda, maintenance provision, equipment to run an airline and the systems for the safe and secure operation of an international airline” bagenda explained.
After the certification from the civil aviation authority, Uganda airline is going to start with the regional flights in all the east African countries, then south Africa before it expands to Europe, asia and the middle east, perhaps, plus other parts of the world. Surely the revival of the national airline is going to work wonders for the economy and also boost the tourism industry of Uganda and east Africa as a whole.

The Uganda airlines plane is going to take up the status of national carrier after air Uganda’s grounding in June 2014 after the audit by ICAO. The new revived national air line’s main hub is Entebbe international airport according to IATA. It is now better with the new Uganda airlines, the bombardier CRJ900.