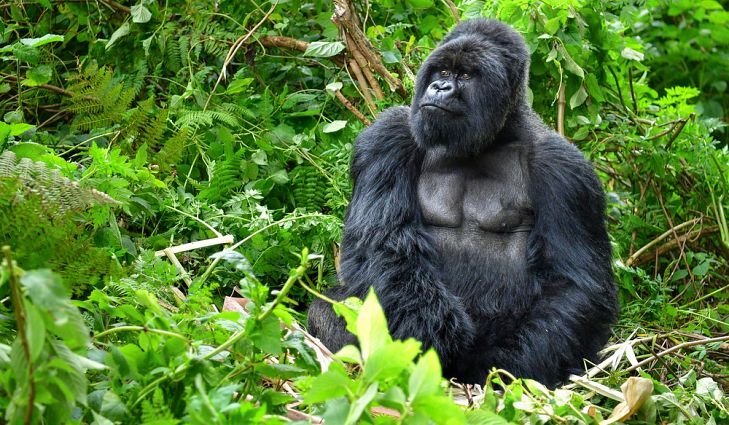 Gorillas have captivated human curiosity; understand the behavior and human like natures of the rare precious primates. Visit the rainforests of Africa in the countries like Uganda, Rwanda and DRC. The countries that support    Gorillas in safe and protective  ways.

Gorillas       are endangered     wildlife, anytime spent with the Mountain Gorillas is a great exception experience once in s life time.

Rwanda, Mountain Gorillas are located in the Volcanoes Nation Park, in the northwestern of the country. Volcanoes National Park is a rainforest park   a habitant. There 10 habituated Gorilla groups in volcanoes National Park the group ranges from 11 to 34 family members. Their footsteps of American Primatologist and conservationist Dian Fossey, this woman  was the first to the study the ways of the mountain Gorillas ,until she wrote about the Gorilla in the mist she brought the idea of Gorilla conservation.

Visiting the Gorillas every year round, the rainforest it’s easier to trek in the dry seasons, during mid-December to early February and June to September.

Park rangers will track the gorilla’s movement before the trekkers head for the trails. Rwanda Gorilla permit goes for 1500 USD.

The park inhabits 11 mountain Gorilla families, these include young ones, silverbacks, black backs both male and females.

Trekkers may option for Gorilla habituation experience which also is only done in Uganda, the habituation is a process of have face to face encounter with the mountain Gorillas for 4hours with   game rangers as you train them to live close to human beings.

The seasons for Gorilla trekking which are most favorable are the dry seasons running from January to February and June to September.

Uganda Gorilla permits cost 600USD regardless of the season, Gorilla habituation is charged at a fee USD 1500 a maximum of four people is allowed. The forests are not for the faint hearted the elevation is 7,500 feet in humid and muddy conditions.

The rainforest is covered in the volcanoes; the habitat which is covers the three countries that inhabit the Mountain Gorillas, their known as the volcanoes or the Virungas. The park has about eight Gorilla groups. However Congo is still recovering from war conflict this ended in 2003, civil unrest still continues in the country. In Congo Gorilla permits cost 400 USD.