Chimpanzee Trekking in Kibale : With lush tropical rainforest and fascinating diversity of animals, the 795 square Km Kibale Forest National Park is one of the most beautiful and stunning forests in Uganda. It is part of the wider Kibale Conservation Area, which consists of Kibale National Park, the Semuliki National Park, the Toro – Semliki and Katonga Wildlife Reserves. Kibale is not only the most common destination for Chimpanzee Trekking in Uganda, but also East Africa at large. 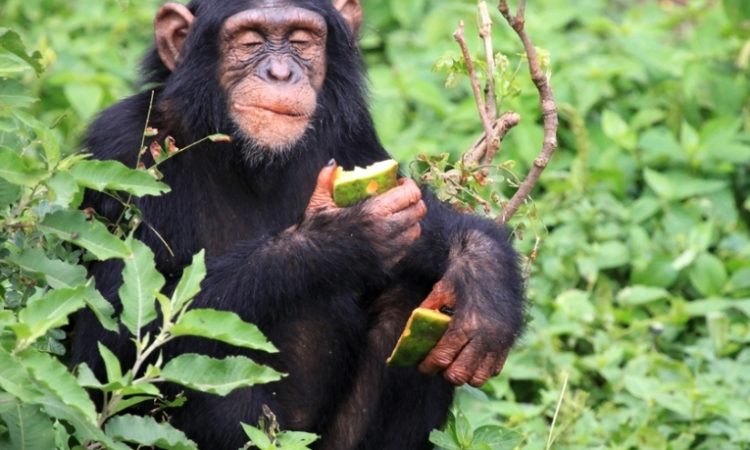 The forest is worth protecting as it is home to the largest number of Man’s closest living relative, the endangered Chimpanzee as well as the Threatened Colobus and L’hoest monkey. The forest had one of the highest diversity of primates in the World totalling to 13 species including the black and white colobus, grey-cheeked Mangabey, blue monkey, red tailed monkey, bush babies and pottos. Kibale is listed as one of the 30 important bird areas in Uganda. Atleast 372 species of birds, occuring in 58 families have been listed. Those that are undere threat are olive long-tailed cuckoo, red-faced woodland warbler, purple-breatsed sunbird among others. Common birds include black and white casqued Hornbill, crowned eagle, great blue turaco and grey parrot. Reptiles and amphibians are also abundant but relatively little is known about them. The invertebrates include 45 species of forest swallowtail and Charaxes butterflies. There is an impressive number of mammals such as the forest elephants, Buffaloes, bushpigs, duikers and bats.

The communities around the park are composed of Batooro and immigrant Bakiga. They are primarily subsistence farmers who grow Bananas, Sweet Potatoes, among other crops. Community tours through local community groups are organised to boost the Kibale Forest experience. There are organised excursions to the Chimps leaving from Kanyanchu. The morning walk is reported to offer a better opportunity to see the primates, usually to be found in the fig trees.

A community based organisation called KAFRED( Kibale Association For Rural Development) supports eco-tourism initiatives and manages Bigodi Wetland Sanctuary alongside the Magombe swamp. The swamp is located 3 Km past the Kibale Forest towards Bigodi. Guided swamp walks along a trail with boardwalks is a memorable experience here. The swamp is rich with a variety of vegetation. The prominent vegetation is papyrus. Along the board walks, Red colobus monkeys, black &white colobus monkeys, great blue turaco are a sight to behold. Make sure that you take precautions against the red ants army that might ascend on your legs by wearing boots and tucking trousers into socks.