Interesting Facts About Mountain Gorillas : Mountain Gorillas are the most unique mammals that live in the forested wilderness of African continent of Uganda, Rwanda and Congo. They are endangered species that have a close share of DNA to humans as far as genetics are concerned, gorillas act as tourism attractions, meaning Gorilla trekking encounter is worth it that makes every encounter different. Moreover, are subspecies of the Eastern gorillas and other subspecies being the Eastern lowland gorillas. And before you head out to encounter mountain gorillas, you will need to learn about some interesting facts and habits and much more as follows; 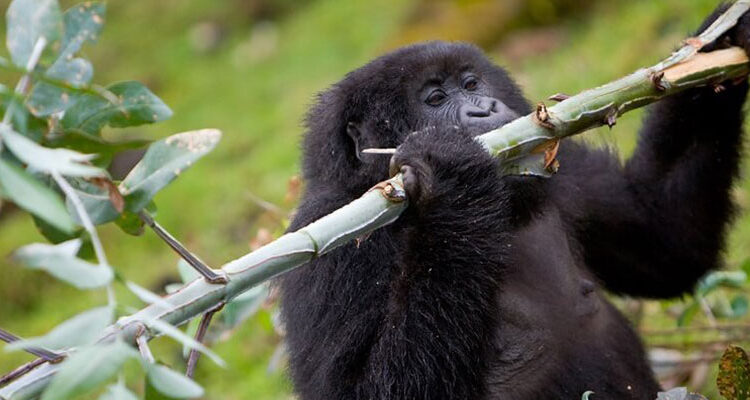 Gorillas have hands and feet like that of humans including opposable thumbs and big toes.

Gorillas in captivity know how to use sign language to communicate with humans.

Gorillas can live up to 54 years of age.

Gorillas do not have tails

Mountain gorillas’ males can weight up to 390 pounds and half about 240 -250 for female gorillas.

Female gorillas usually give birth after 4 to 5 years with an estimated gestation period of 8 to 9 months.

Gorillas are the world’s largest primates; an adult mountain gorilla stand at around 4 to 6 feet in height. The silverback is bigger than this average estimates.

Mountain gorillas have arms which are longer than their legs and usually walk on all fours. Gorillas walk on the knuckles of their hands which is called Knuckle-walking. They can also walk with only their legs ‘’as humans do’ ’Although knuckle walking makes them more comfortable and balance to climb trees and steep hills.

They have thicker body hair that helps them stay in cold high altitude places. Since gorillas live in tropical rainforest most of the year can be wet and gorillas are able to live warm due to the hair covering their bodies.

A mature male gorilla when they grow turn grey hair on the back thus naming them silverback.

Mountain gorillas have dark brown eyes, framed by a dark ring around the iris and are said to have a singular eye color of dark brown. Unlike humans who have many eye colors. To some domestic mammals have more than one eye color but rare in wild animals.

Mountain gorillas have unique fingerprints like humans, this is because how closely related we are, shouldn’t come as a shocking revelation. With many technologies, this couldn’t be more puzzling and worthwhile.

They also have a rare nose pattern that is specific to each Mountain gorilla. Since their fingers are not easily seen, then the nose print is what you use to distinguish between two similar looking individuals.

Mountain gorillas are found in three countries Uganda, Rwanda and Democratic Republic of Congo. In the wild over 1064 individuals are still existing.

Gorillas live between 35 to 40 years in the wild. But humans can live much longer yet gorillas are still living as long as we were living before modern medicine and mechanization of work.

Gorillas live in families consisting of about 30 individuals with one silverback as the leader of the group.

A gorilla family is headed by a silverback who ensures their safety and protection.

The silverback is in charge of ensuring the family safety. It’s his role in protecting the members of his troop even if he has to die while doing it.

They can build their sleeping nests every day from tree branches and on the ground. Remember they don’t stay in one place for prolonged period of time. Gorillas always are on the move for food every morning.

Gorillas occasionally built their sleeping nests up in the trees especially in bamboo.

Gorillas are primarily herbivores and feed their diet on barks, roots small branches, fruits, piths and tree pulp, also can eat ants and insects on occasion. Bamboo is one of their diet mountain gorillas can feed on.

Gorillas mostly feed during the morning and evening until the time of building their nest.

Mountain gorillas take 8.5 months to have a baby and usually produce one baby at a time, very rare to give birth to twins.

Gorillas are great apes look like humans and chimpanzee because of their intelligence and have developed brains.

Gorillas are stronger than a human.

Humans and gorillas share 98.8 of our DNA, a separation of just 1.6%. Gorillas use tools, learn body language, express emotions and friendly to a person, indeed are our close cousins.

Gorillas can learn a language and use of tools. With enough guided human interaction with gorillas both in the wild and in zoos, have shown improved language skills in both sign language and spoken language.

Gorilla can easily be transmitted with human diseases that why people who are sick are not allowed to trek mountain gorillas in their nature inhabits.

About the gorilla conservation, habitat destruction has involved in protecting and ensuring a healthy ecosystem of all the natural plants as well as animals in the park.

Gorilla Tourism; it has contributed a lot toward conservation of gorillas and their homes in the wild forests. This is all about the money collected from gorilla permits used to fund activities like research and monitoring.