Mount Mikeno,is a dormant volcanic Mountain this is located in the Democratic Republic of the Congo  region  of the Virunga Mountains which is with Mount Nyiragongo, Mount Nyamuragia, Mount Bisoke and Mount Karisimbi. 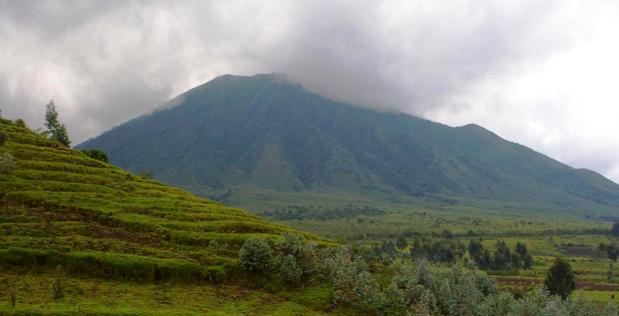 At 4,437 etres, Mount Mikeno is second highest peak in the Virunga Mountains, this happened after Karisimbi, 13th highest mountain of Africa. Mount Mikeno in local word means ‘poor’, this was named for the harsh slopes which preclude human habitation.

Mount Mikeno lies within the Virunga National Park known for the critically endangered mount Gorillas living on the slopes of Mount Mikeno.

Mount Mikeno leaves from the nearby Bukima patrol post.

Mount Mikeno is a virunga conservation area which is made of about eight volcanoes .Mountain Mikeno is one of the dormant eight active volcanoes.

Virunga national park is found along with Nyiragongo, Nyamulangira, Karisimbi Mikeno and Bisoke, this is due to slopes.

Democratic Republican of Congo is a home to the Mountain Gorillas inhabiting the fertile slopes of Mikeno.

Mountain Mikeno can be accessed   if one uses Kigali airport.

The Tourists fly into the Kigali international airport taking the border to cross at Gisenyi Rwanda.

A yellow fever vaccination certificate and visa required to enter Democratic republic of Congo and Rwanda.

The climate is favorable especially in December to February and June to August, especting it to rain anytime of the day, carry the rain gears.

There are number of activities to carry out these include Hiking, Gorilla trekking ,bird watching, amazing sceneries .