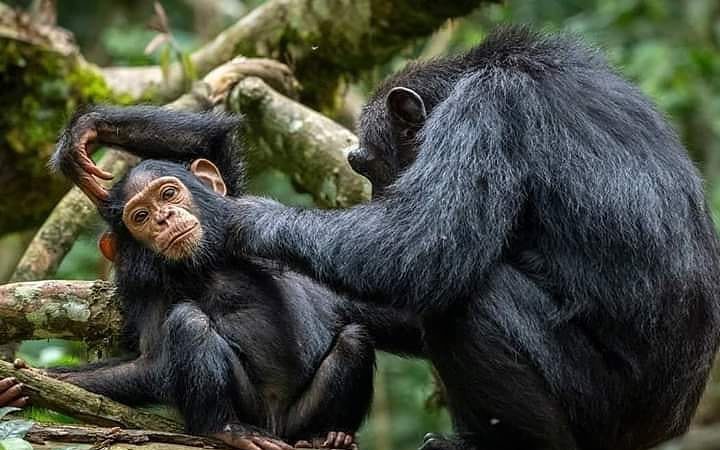 Chimpanzees are primates, species of apes that share almost 90% of their DNA with humans. Chimpanzees are part of the endangered apes in the world. These endangered apes live in savannahs and tropical forests in Africa. Most of the world’s chimpanzees almost half the world’s population is found in Kibale National Park in Uganda; the park is commonly known as ‘the capital of chimpanzees/primates’. Other parts in Uganda where you can find chimpanzees includes the Kalinzu forest and Kyambura Gorge in Queen Elizabeth National park, Budongo Forest in Murchison Falls National Park and Semuliki National Reserve. You can also find a few of these primates in DRC, Rwanda, South Tanzania and Gambia. Chimpanzee trekking is one of the top tourist activities in Uganda, and Rwanda since they harbour quite a number of Chimps.

The chimpanzees are between large and small, making them medium-sized animals with a weight of 32-60 kg an individual, of course, the males being slightly heavier than the females. Their skins are covered with black far all over apart from their faces, feet and hands that are dark brown; the males have a short white beard. When the chimpanzees are older, their backs turn grey and their foreheads bald.

The chimpanzees are diurnal animals always up in the dawn to spend their day roaming and running through forests on the trees and ground. Their mornings are semi-active unless they are running from danger, they will be moving up and about in trees and the ground with less vigorous vibes. They normally rest in the midday and in the afternoon have their feeding. These primates use their hands and feet to get around the forests as they leap and swing with the hands from tree branch to another. The chimpanzees can also stand and walk upright though they often walk on all four limbs to cover longer distances and paddle in water (the chimpanzees don’t swim). Nighttime is their rest time as they sleep in their branch and leaf built nests in the trees.

Chimpanzees are omnivores animal and mainly eat fruits and leaves though in some cases they have been found to eat insects, eggs, chicks nuts and hunt for small monkeys, bushbucks and wild pigs. The chimpanzees include but not limited omnivores foods include fruits, berries, leaves, blossoms etc. In cases of sickness, they use certain plants as medicine to cure the diseases and thrust out stomach infections.

The chimpanzees can live up to 40 or 45 years in their natural habitat and about 50 or 60 years in captivity. The female chimpanzees give birth once in 5 years after a gestation period of 8 months. The young one normally weighs between 1.6 and 1.8 kg at birth and they are helpless holding on to the mother’s belly fur even as he moves around. These young chimpanzees are normally weaned at 5 years but before 5, at about 6 months the young one is on the back of the mother up to 2 years. At 3 years they are off the mother’s back but staying close to their mother even as she moves. The animals come of age at 16 years for the males and 13 years for the females.

Male chimpanzees can remain in the community of their birth for a lifetime though in some instances adolescents can move to other communities if the mother moves, they move with their mothers. The females however when they come of age at 11 or 13, they will leave their community and join another group.

Chimpanzees are vibrant animals, social and live in communities sometimes called unit groups. Like most wild animals these communities are determined by the males association within a territory; territories can be a wide as hundreds of kilometres or a few kilometres depending on several factors like availability of food, safety from predators among other things.

Still, like other animal communities, the adult males take the lead or dominancy over the females and their young ones. The number of females in one community is normally higher than the males though the number of adults all together most times is the same as the young ones.

The male leadership in chimpanzee communities is not structured and is easily influenced by various factors; the members of each community can leave or join another community or subgroup whenever they feel like, however, the leading male of a group dominant male is able to control females on heat through clinging kind of behaviour; this behaviour can chase away subordinate males if they are few though if they are many they can easily gang up on the male and throw off the female and out of the community.

Chimpanzee communities don’t relate well with each other with males of a community constantly doing patrols around their territories and most of the chimpanzees that trying to enter a new group are normally attacked. In cases, big communities can seize smaller groups and kill the individuals of the group.

These primates like the Gorillas are endangered species, the international union for Conservation of Nature reports state that the primates’ numbers have severely reduced since the 1980s and this has left their population lower than the other wild animals. The primates are mainly hunted for meat by humans and preyed upon by lions and leopards; humans are also engaged in several activities like logging or farming that lead to the destruction of the primates’ habitat.