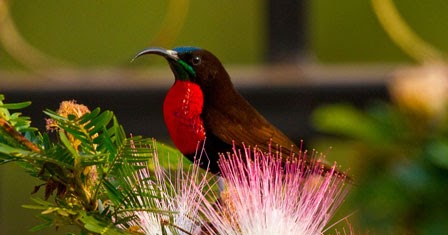 However, Rwanda stands out as one of the best birding destinations in East Africa given the sheer variety of bird habitats registered in Rwanda with a few endemic bird species that can only be found in the Albertine Rift valley. Rwanda’s beauty ranges range from mountainous areas, montane forests, grasslands, plains, vast swamps, rivers, lakes and off course the rolling hills. Rwanda has good road networks with safe and clean towns. Because of her small size, it is easy to cover the country in a short time compared to Uganda or Tanzania. Birdwatching in Rwanda can be done throughout the year but some months have more favorable conditions for birding than others. Rwanda has two major rain and dry seasons. The period between December and January is considered perfect for birding in Rwanda. These months fall in the dry season and are special because thousands of migratory birds come into the country to escape the harsh winter conditions in Europe and the Arctic’s. Rwanda has about 7 main birding destinations located in 3 of her national parks including Nyungwe forest national park, Akagera national park and the Volcanoes National Park.

Nyungwe National park is the largest and oldest montane forest in Africa with over 300 different bird species. The Bigugu Mountain in the forest is one of the best spots for observing the birds as they feed on the tree canopies. One can also move out of the forest and go to the Gisakura tea estate which is a favourite place for most birds. The Red-collared Babbler is arguably the most popular and attractive bird species in Nyungwe forest. Nyungwe forest also hosts the Albertine owlet, Blue-headed sunbird, Grauer’s Swamp Warbler, Grauer’s Warbler, Handsome Francolin, Handsome spur fowls, Neumann’s Warbler, Purple Breasted Sunbirds, Regal sunbird, Rwenzori Batis, Rwenzori Nightjar, Rwenzori Turaco and the Red collared babblers among others.

The best way to explore this forest is by taking a nature walk in the forest national park or ride a bike through part of the Congo Nile trail which cuts through the forest. There are well-developed forest trails that lead to the different sections of the forest. The canopy walk is also another way to enjoy a birding in Nyungwe forest national park. The canopy walkway in Nyungwe forest is 160 meters long and is built on top of the heavy trees giving you an aerial view of the vast forest and its creatures. The canopy walk starts at the Uwinka Visitors Center and goes through a hanging platform that is about 45 meters above the ground.  From these heights, visitors get spectacular views of the rain-forest, animals and birds. If you have enough time on the Rwanda birding safari, you may also visit the Kamiranzovu swamp.

Nyungwe forest is very dense and viewing the birds can be difficult because most of them prefer to stay on the trees. Your experienced birder should be able to take you to the best spots of the forest where you can have clear views of the birds. Birdwatching in the Nyungwe forest national park will also expose you to other forest creatures and particularly the primates like Chimpanzees, Colobus monkeys and the rare golden monkeys.

Akagera National Park is the only savannah national park in Rwanda park located in the north eastern part of Rwanda close to the border with Tanzania with a collection of lakes and wetlands that support the existence of about 310 species of birds in this park. Birding in Akegare national park mainly takes place around Lake Ihema on its islands, marshes and wetlands. A boat ride on Lake Ihema is an effect way to spot the birds however, birding trips on the savannah are organized early in the morning and evening. The morning sessions are arguably the most fun as there is a lot of bird activity. The most common bird species include the Red-faced barbet, the endangered papyrus Ganolex, the elusive Ring-necked Francolin, the Carruthers’s Cisticola, Grey-crowned Cranes, Northern Brown-throated Weaver, Papyrus Gonolek, White-collared Oliveback and White-Winged Swamp Warbler. The African Starling is possibly the most beautiful bird and a highlight in Akagera national park featuring amazing feathers which change color and glitter in the mid-day sun.

The fascinating elusive Shoebill stork is yet another resident in Akagera national park although it is very difficult to spot. The best time for birding in Akagera is during the dry season (May to September). The southern sector of the park has more variety of butterflies and birds than the northern sector. While in Akagera national park, expect to encounter the famous mammals like elephants, giraffes, hippos, lions and countless antelopes. Accommodation can be in tented camps or standard cottages depending on your preference and budget.

This is Rwanda’s newest national park and is found in the North western part of Rwanda. Even before it became a national park, Gishwati National Park was known as Rwanda’s prime spot for birding with 395 species on offer. Some of them include the Martial Eagle, Purple-breasted Sunbirds, Red-throated Alethe, Regal Sunbirds, Ruwenzori Batis, Ruwenzori Turaco, Strange Weaver, Stripe-breasted Tit and the Grey Crowned Crane. Most of the species are forest dwellers or those endemic to the Albertine Rift. There are also those that migrate all the way from Congo for most parts of the year. While looking out for the birds, expect to encounter baboons, chimpanzees, blue and golden monkeys.

Lake Kivu is located close to Volcanoes national park and close to the Rwanda-Congo border. It is easy to forget that the Lake is a top birding destination in Rwanda because it is more known for its beautiful beaches, islands and as one of the best places for sport fishing sport in Rwanda. The natural beauty of the lake and its islands attract birds like the White-breasted Cormorants and Pied Kingfishers. Thousands of migratory birds can be sighted feeding round the lake during certain months of the year together with the residents.  For a complete birding experience in Lake Kivu, you must visit Nkora Island. Nkora Island is a small fishing village with an amazing collection of water birds and even cave bats. You will also get to mingle with the local fishermen and learn about how they make ends meet.

About 10 percent of Rwanda’s made up wetlands, swamps and marshes such as Rugezi, Akanyaru and Rugezi provide naturel feeding and nesting grounds for some birds because they keep away most predators while also proving insects and frogs for food. The Rugezi Marsh is a top birding destination and the only RAMSAR site in Rwanda. The marsh covers an area of about 6,734 hectares, and is host to about 43 bird species including the Grauners Swap Warbler, Papyrus Genolek, Papyrus Yellow Walber and Thick Billed Seedeater. As you go southwards from the marsh, you will find open waters in what is Lake Nyagafunzo. This lake is a birders paradise in its own right. It offers opportunities to spot the Lesser Jacana and White-backed Duck.

The wetlands in Nyabarongo river are not well known but offer wonderful birding opportunities. This river is a tributary of the great river Nile and empties its waters on river Akagera which then flows to Lake Victoria. The Wetlands are home to Garuer’s swamp warblers and papyrus gonoleks. You can also encounter swamp elephants and the elusive Sitatunga while on a birding mission here. Other wetlands and marshes that host birding sanctuaries are those in Bugesera District and Akanyaru. Akanyaru wetlands are found along the border with Burundi. They stand out for their floating vegetation and papyrus swamps. Here you can spot the about 54 species of birds including the lesser kestrel, Madagascar squacco Heron, pallid harrier and the endangered papyrus Gonolex.