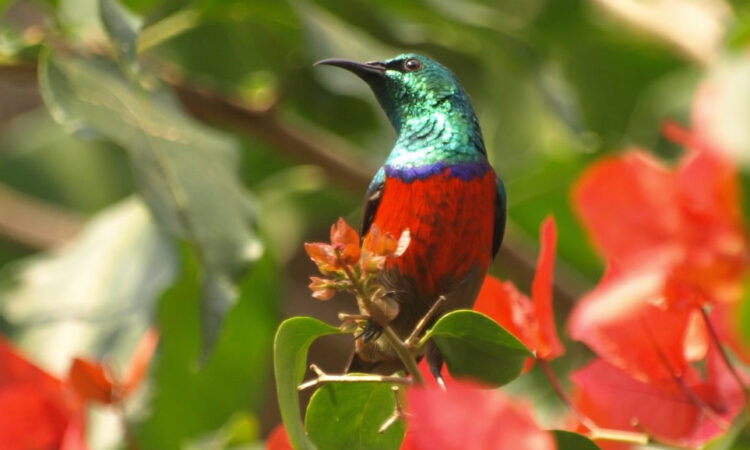 This bird species is usually seen during its breeding season and it appears alone or in pairs. If it’s a group the African paradise fly catchers will be converging to feed. When you get closer to the flock you will be amazed at rufous and white morphs and grayish underparts of the bird. You will not miss the dzee-dzee sound which is a typical characteristic of this bird species. To differentiate the male from the female, the male has central tail feathers unlike the females plus the females have smaller crests. This is one of the commonest bird species you will see in Mgahinga.

The small long-legged and short-tailed bird is another common bird species in Mgahinga. The bird has a number of unique features that include its tail with its black and while T pattern – most seen when the bird is flying. This bird is found in the mid- mountain ranges of the park.

This small songbird with a long tail can be seen in groups of breeding males. The bird is about 12 to 13 centimeters in length and for a breeding male, its length will go up to 20cm with the help of its long tail. This bird is characterized with dark brown and white patches on its wings; it’s  usually spotted on mountain slopes.

This bird species is under the waxbill family and when in close contact you will notice its red back and face. The bird’s color  intensity varies between the males and females. The males have more red on the face and the females more red on the backs. The birds are high pitched, you will not miss their ‘’tsit’’ sound  whenever you are in their territory.

The black kite species is often mistaken for an eagle however the black kite is a medium sized bird with a slightly forked tail, a short neck and head. Fun fact about this bird’s tail, it can disappear when the bird fully opens up.  The black kite can be seen gliding and changing direction while it flies through the forest.

An interesting bird species with short white eyebrows, a rufous chest and a grey belly making it the only bird in the robin chat species with a grey belly. This bird is eye-catching, you can’t miss it; its outer tail feathers are brightly  orange  and are clearly seen when the bird flies. The Cape Robin Chat  can be seen in pairs on most occasions, rarely alone.

This bird has a black face and brown crest which differentiates it from other mouse birds. The bird can be seen in small social groups feeding on fruits, leaves, flowers and nectar. When it’s not feeding the bird is usually hanging upside down on trees exposing its black skin on the belly. Since the bird loves trees, you will easily spot it inside the forest.