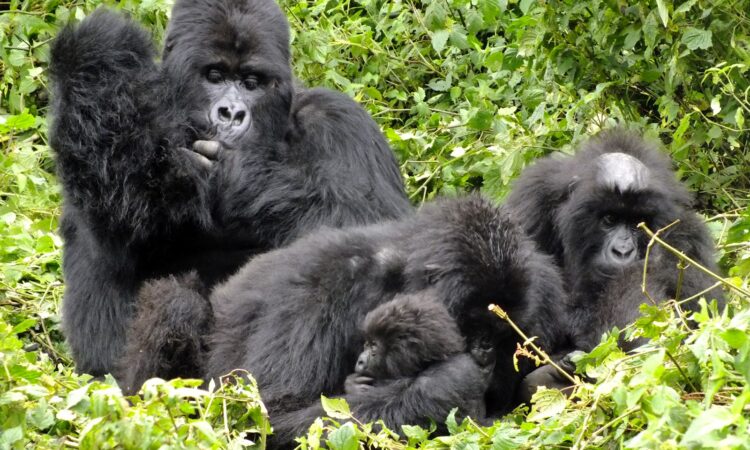 The mountain gorillas habituated for tourism purposes are in 10 families and are:-

Susa Family is the most popular group in Volcanoes National Park and one of the hardest to trek because its stays in high mountain ranges. This group was studied by the famous mountain gorilla researcher Dian Fossey before her death.

The group boasts 28 members currently with 3 silverbacks; the oldest habituated mountain gorillas in Rwanda is also among the members of this group. The group is also for having playful twins Byishimo and Impano.

Susa is from Susa River where this family normally stays

In some instances trekkers have failed to trek this family because it’s in very distant high ranges.

Originally called Susa B and now called Karisimbi, the group is a breakaway from Susa. Its name Karisimbi is derived from Mt Karisimbi where these gorillas now make their life; the gorillas are normally on the higher mountain slopes of this Volcano. Because of its location, this family is normally visited by hikers or persons interested in a great hike. The group has 15 members currently with a silverback.

Like the Susa family, sometimes hiking this family can be halted because it’s in very distant high mountain ranges.

This group was formed by two gorillas one from Sabyinyo and another from Agashya, the gorillas came together and other members joined them and now the group has 9 members including the silverback thus Mountain Gorilla families in Volcanoes National Park.

This family has 8 members that are led by silverback Guhonda. Guhonda is strong and the biggest of all silverbacks in the park. This group is very close to the park border and one of the easiest groups to trek. Its name Sabyinyo means “old man’s teeth.”

Amahoro family boasts 17 members with one silverback. This group is named Amahoro meaning “peace” because of the group’s peaceful nature from the silverback Ubumwe to all the members this group is peace. The group lives in a steep mountain area of the park so to get to the family you take some bit of a climb.

Led by Silverback Kwitonda the group has 18 members. This group migrated from Virunga National Park in the Democratic republic of Congo. It’s also one of the hard groups to trek because it stays in very distant high ranges.

This group was intiatally habiuteted with 13 members but it currently has 25 members led by silverback Agashya hence the group’s name Agashya. The orginial silverback of the group though was Nyakarima but was ousted by the Agashya after an intense fight.

It is believed that this family is the one that was featured in the famous movie “Gorillas in the Mist” so its famous among movie watchers/lovers. This family lives on the slopes on Mt Visoke and has 11 members led by silverback Bwenge. In the past year this group has had some huge losses losing six infants within the same span of time.

Because of its location, it’s also another hard group to trek and treks to the family has been halted before because of the family being in very distant high ranges.

This family has 11 members with two silverbacks. This family though can be founs around the Karismbi area, it’s constantly on the move hence its name Ugenda which means “being on the move.”

This group is a breakaway from Amaboro and currently has 11 members with a silverback Charles. The fight to break away from Amahoro took several months before Charles overpowered Ubumwe of Amahoro and took some females from Amahoro with him and those were the original members of the Umubano.