The Bahai Temple was built over 50 years ago it also known as the Mashriqu’l-Adhkar, which is the only one in Africa. However, there are also other nine which are spread around the world. A lot of tourists to uganda miss out on the fun amazing factors in Kampala. This is because the country is mainly known for the wildlife safaris in the different national parks found in the countryside, such as, Bwindi impenetrable national park for the gorillas, queen Elizabeth national park for the climbing lions and the Kibale national park for the chimpanzees among others. However, a few that take a few days roaming around in Kampala, they are blessed to explore a lot of new interesting features of Uganda, like the Bahai temple. 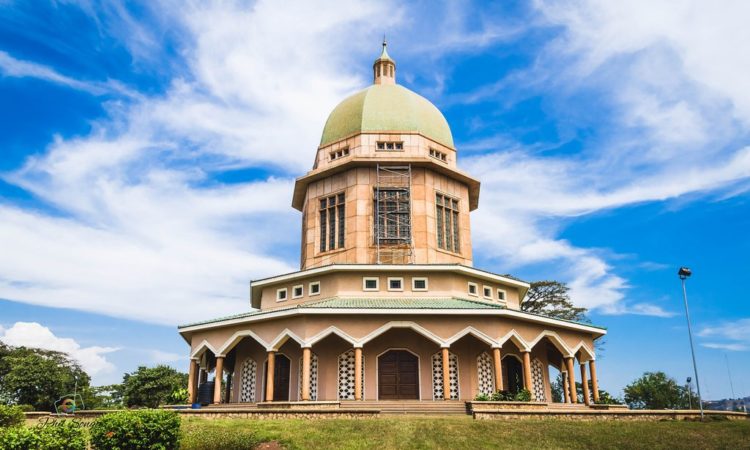 This majestic piece of art, Bahai temple, is gracefully situated in one of the suburbs of Kampala city, capital of Uganda. Bahai temple is located about 4 miles from the main city center of Kampala, on Kikaya hill along Gayaza road. It is famously known for being a spiritual home for the Bahai Faith in Uganda.  The Bahai temple sits on a 52 acres wide land on kikaya hill; the temple measures 265 feet in height, and 84 feet interior diameter with a 55 hectare compound of different floral garden patches. The construction of the bahai temple in Kampala was an effort of more than one country; Belgium brought the roof tiles, Germany bought the colored glass, the windows where imported from Britain, and Uganda was responsible for the timber and the hard rocks to put up this phenomenal temple.

The history of the temple roots way back in 1946 when Ugandan Dr Ernest Kalibala one of Uganda’s first PhDs then associated with the New York Bahai Centre. On August 3, 1951 members of the Bahai Faith arrived in Kampala. In December the first 2 Ugandans converted to the faith. In 1958, the land about 52 acres was purchased in a tranquil place with in kampala,  and the construction started and took 4 years, to the present day is on Kikaya hill.

The Bahai Temple in Uganda officially opened to the public in January 15, 1962, which is the very year when Uganda received its independence. The architectural design is such a wonder; the temple was constructed in the form of a dome up on the hill, the inside of the dome is painted a pale blue color and can accommodate a seat up of 800 people. The building has a 44ft diameter with nine large pillars and 27 smaller ones which support the temple up right. Surrounded with peaceful floral garden good for an evening relaxation, combined with plants of different heights, colors, textures, and fragrances, the environment around Bahai temple creates a relaxation of mind and also delights emotions.

Basing on its strategic location, the Bahai Mother Temple, even in miles away, is still very visible to almost all parts of Kampala. Tourists always save a day on their arrival to Uganda to visit this area during their holidays. The place welcomes everyone regardless of their religion and background though the Bahai Faith principles have to be respected during their touring time. Acts of immorality are therefore forbidden once you step in this place of worship.

The Bahai Faith is strange and not so known in Uganda, however, a number of publications talk about it. The bahai faith teaches considerable number of theological, social, and spiritual that were established by Bahaullah who is taken and believed to be the founder of the this particular religion; also clarified by successive leaders.

The Bahai teachings include theological statements about God, his messengers, and humans, as well as social teachings including the equality of humans, regardless of gender, race, and class, the harmony of science of religion and the elimination of extremes of wealth and poverty, among others, this principle of the Bahai temple make it sound genuine if at all humans would incline to understand it more. The three core assertions of the Bahai Faith, sometimes termed the “three onenesses”, are central in the teachings of the religion. They are the Oneness of God, Oneness of Religion and the Oneness of Humanity, which sounds true.

What is done at Bahai temple?

There is a lot done at Bahai temple during your Ugandan safari, even though it is unbelievable. In the evening, the delightful sights and sounds of birds singing gratifies the lounging tourists and visitors in the gardens, supplemented with the cool breeze from down the hill.

Religious meetings and gatherings mark the highlight to bahai temple in Uganda.  A lot of people visit bahai temple for devotional gatherings like yoga and meditation. Also the hindus in Uganda love the bahai temple and they always visit for different religious devotions all through the year. Other religions also hold fasting meetings since the place is so conducive and silent as if it is isolated from the city noise.

A lot of study circles are conducted at bahai temple; the bahai community came up with different study series to help the members to develop a minding sense to the society around. These study circles are carried out groups of about 10 people; the groups are responsible to teach the members about the different pillars of the bahai faith, the bahai writing and the unity of prayer among other strange thing about the life hereafter.

Birding is awesome at Bahai temple. The natural environment around Bahai temple attracts a lot of birds. The different tree species and the flowers attract birds and insects. There are over 8 species of the common east African birds which shelter in the old trees of around bahai temple. The weaver birds are common, together with a few wood peckers, ring – necked doves, pigeons and palm nut vultures among others. The tweets of the birds heard while in the gardens, create a very tranquil environment good for relaxation.

Other activities done at the bahai temple include children class lessons which help to gather children from different kids from the neighborhood to teach them about the bahai teachings and the bahai faith. Junior youth class lessons help the youth to learn about the moral decisions and they are also taught how to earn a living through drama, art and craft, singing among others.

Bahai temple offers a sensational moment to the visitors enticed with the tweets from the birds in the trees plus the breeze of wind in the trees and the butter flies all communicate the wonders of God’s nature endowed in this little pearl of Africa, Uganda. The tranquility of the surrounding near bahai temple provides bliss for yoga and other meditation activities and mind rejuvenation.

Accommodation While on Tour to Kampala’s Bahai Temple

There are a number of restaurants and motels located not far away from the Bahai House of Worship, with fair prices to their standard services. There is Nyumba 591 about 2.8km from the temple and a night goes around for Ush 66,045, also about 1.4km there is Palm Gardens and Guest house located in Kanyanya, $19 a room, free WiFi. Others we have Etana Motel which is about 2.3 km away from the Temple and also Kampala Tree House about 3.1 km away from Bahai Temple, here a night costs Ush 110,075, plus satellite hotel near kisaasi trading centre and many others with in the vicinity of bahai temple.

You can visit the Bahai temple any time of the year, however, during the holidays, from November to December, however, in December the place tends to be always booked for weddings, picnic, and other holiday parties. You can tell your tour operator to include the Bahai temple trip to your itinerary for the Kampala city tour.