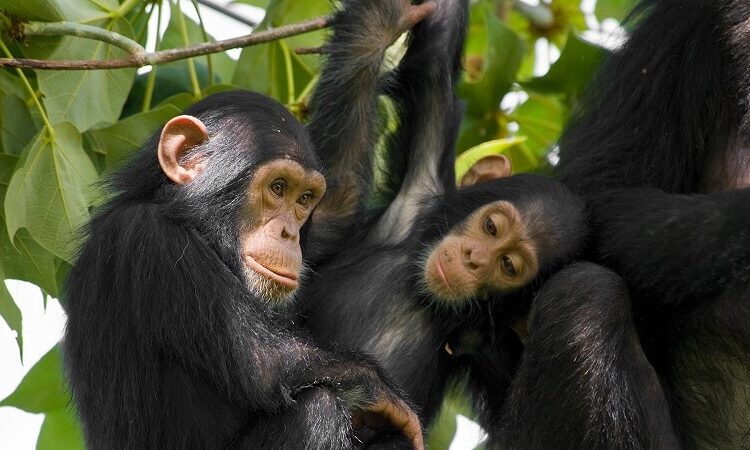 Chimpanzee trekking in Rwanda : As a country that is taking her tourism to another level, Rwanda is surely the place to be. The country boosts of a diversity of wildlife including a variety of birds, reptiles, amphibians, the Big 5 and primates that include the famous endangered golden monkeys, mountain gorillas and chimpanzees. Rwanda animal parks include Akagera national park, Gishwati-Mukura National Park, Volcanoes National Park and Nyungwe National Park. All these parks are open for visitors all year round.

Chimpanzee trekking is one of the major tourism activities done in Rwanda. Chimpanzees are the closest to humans in terms of behavior as they have 98.7% of our DNA. Like us, they use tons of body language like hugs, kissing to communicate and just like people; they are very social beings making them interesting to see.

Chimpanzee trekking is mainly done in Nyungwe national park, Africa’s oldest montane forest dating back to the ice age period.  The Park is home to over 500 chimpanzees and 13 other species of primates like the black faced vervet monkeys and the Angola colobus that make the trek interesting and diverse. Chimpanzee trekking in Nyungwe takes place in two areas namely the Cyamudongo and Uwinka areas.

Trekking begins as early as 5 am with briefing at Uwinka before the guides lead you to your location of the trek. A group of guides usually go ahead of the trekkers to track where the chimpanzees nested the previous night so as to allow tourists to avoid unnecessary treks before they reach their destination. After the chimpanzees are found, the trekkers are allowed one hour with them to interact, take pictures and learn more about their human like behaviour.

The other park chimpanzee trekking is done is the Gishwati-Mukura National Park. It is the newest national park in Rwanda opened up in 2015 by merging the Gishwati and Mukura forests. It was opened to majorly protect the remaining population of chimpanzees in the two forests. The park however is also home to golden monkeys, L’Hoest’s, blue monkeys and a bird watching hub which are a plus while chimpanzee trekking.

Like at Nyungwe, trekking at Gishwati-Mukura National Park starts early in the morning with briefing about what is expected of you during trekking. After briefing, trekking officially begins with the guides leading the way till the chimpanzees are found. You’re allowed one hour of interaction with the chimpanzees after they are found.

While preparing for a chimpanzee trek, it is important to make adequate preparations and know what is a must have for the trek. First, you need to make sure to book your chimpanzee trekking permit costing $100 per person, way before the trekking date. If you are planning to trek during the peak season (June to September), you may need to book your permit six to twelve months in advance as the permits in those months get booked very fast. You can your permit through your preferred travel agency or directly at Rwanda Development Board.

We recommend long sleeved shirts, trousers, hiking shoes, an insect repellent, a water bottle, a walking stick, some snacks, a rain coat in case of rain and a pair of binoculars to spice up and enjoy your experience.