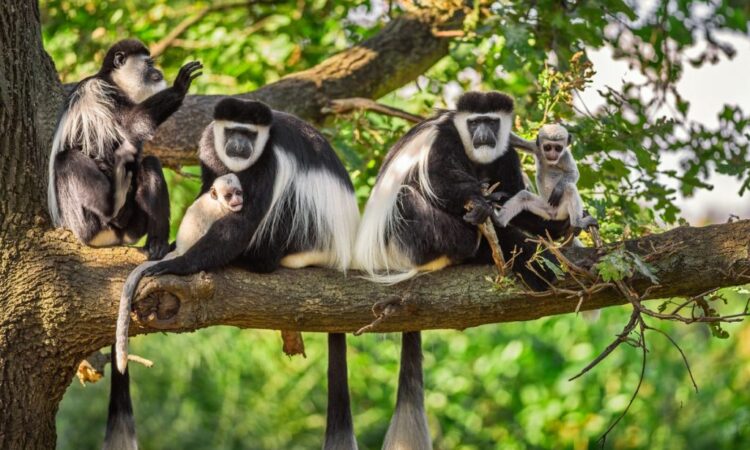 Apart from the chimpanzees, there are several species of monkeys in Nyungwe National Park and one of the special monkeys in Nyungwe forest is the Rwenzori Colobus (Colobus angolensis rwenzori), a subspecies of the Angolan Colobus monkey (Colobus angolensis) species – an attractive Old World monkey with distinctive black-and-white coat, tufty shoulder-pads and a mohawk.

The search for the beautiful wildlife and approaching a large group of these colobus monkeys, watching the lovely monkeys is very interesting. These active and social primates do a lot of playing and grooming when they are not swarming branches of a fruiting tree. Or lining up on the bark and branches of an old tree to eat off the lichens, or covering an entire lush green ground in black and white when they come down from the trees to eat some herbs and clay.

One of the two habituated groups is a super group of about 500 colobus monkeys and their territory is in Uwinka, which is also the location of the park’s visitors’ center or head office.

The second group of habituated Colobus monkeys is not a super group with a much smaller number of monkeys of about 60 individuals. This group is located in Gisakura area.

The Gisakura group is the most visited for the trekking trips because it is easier to find without much trekking, and often the monkeys are hanging out near the edge of the forest. Gisakura (outside the park) is also the location for most lodgings used for stays when visiting Nyungwe National Park for trips, such as Nyungwe Top View Hill Lodge, One&Only Nyungwe House, and Gisakura Guesthouse among others. As such, it is very conveniently located.

The Gisakura colobus monkeys group have four trekking schedules each day; 8am, 10 am, 1 pm, 3 pm. This group is therefore the most suitable if you want to add a short extra activity to chimpanzee tours in Nyungwe national park.

The Uwinka colobus group have one schedule in a day at 9 am because the experience can take a full day depending on where the monkeys would have traveled. Unlike the Gisakura group that can be done as an extra activity on the same day with another activity in Nyungwe, the Uwinka group needs a day of its own allocated. The Uwinka group is great if you want to spend a full day of photography with the colobus monkeys in Nyungwe National Park.