Home » Safaris Blog » How strong are the mountain gorillas?

How strong are the mountain gorillas? 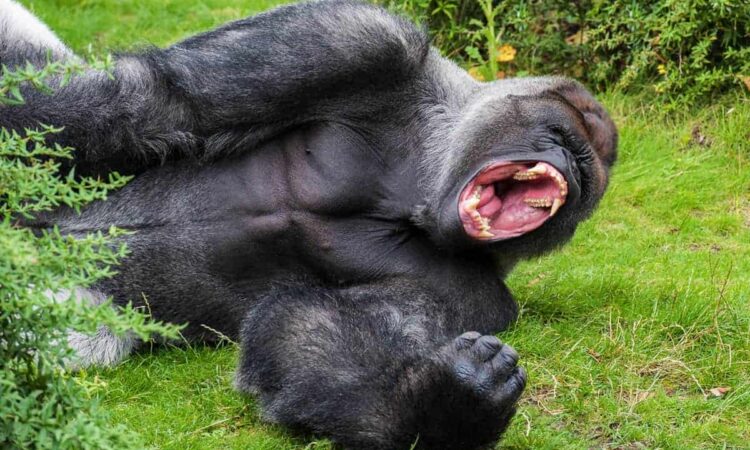 How strong are the mountain gorillas? : Mountain gorillas are known to be huge and scarily; and this makes them look really strong to the humans and may be other animals in the wild. But are they really as strong as they look?

Well there is no doubt about that, mountain gorillas are strong, they are known to carry heavy things that weigh even up to 180 kgs or more. And also when they are angry, they will fight and trample over their opponent with uttermost strength, and the opponent rarely survives the trampling. This kind of strength exhibited in fighting will surely rank the mountain gorilla a strong animal.

Mountain gorillas are endangered primates living in high altitudes in forested mountains. They have brown coloured faces, brown limb and a hairy body all over.  They have four limbs on which they move and also do their other survival activities.

They feed on leaves, fruits, shrubs and small insects. They live in groups of about 5 to 15 individuals led by a male gorilla called a silverback. The mountain gorilla groups are made up of mostly females and their young ones; in some case one of two black backs – Black backs are males in the group that are like second in command from the main silverback.

Mountain gorillas are the most sought after animals in the wild, by tourists in the East African region just after the big five which are the lions, leopards, elephants, Rhinos and Buffaloes. Uganda, Rwanda and the Democratic Republic of Congo, all receive about 10,000 people yearly who visit the countries to have a glimpse at these mountain gorillas.

On a mountain gorilla trekking experience, you will enter into a forested mountain climb up deep into the forest in search of the mountain gorillas. Depending on the park you are trekking you will find  the gorillas in about 3 to 5 hours and then you will spend an hour with the gorillas before you trek downhill back to the your accommodation or next destination.

Mountain gorilla trekking happens all through the year in any of the mentioned parks and trekking permits cost USD 700 for Uganda, USD 1500 for Rwanda and USD 400 for the Democratic Republic of Congo. In this COVID-19 era, trekkers are required to have tested negative for COVID-19  at least 72 hours prior to the trekking experience.