Lake Kivu is one of the African Great Lakes, the lake lies on the border between Rwanda and Democratic Republican of Cong, in the Albertine Rift, the western branch of East African Rift, Lake Kivu empties into Ruzizi River, flowing southwards into Lake Tanganyika. 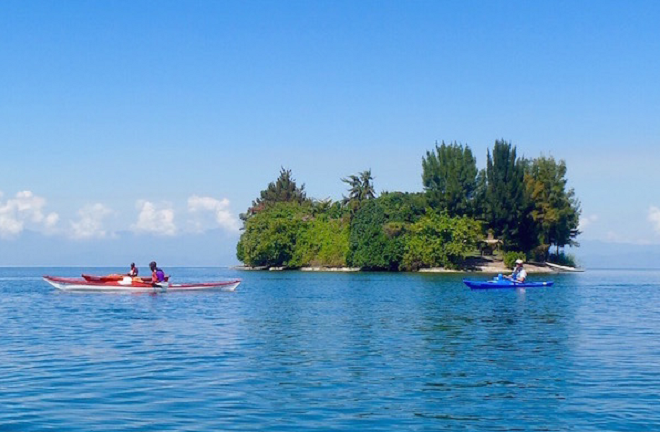 Lake Kivu is 90km long and 50km wide, the shape makes measure difficult, estimating to cover a total surface area of 2,700 km2. Lake Kivu is a height of 1,460 meters above sea level.

The percent of the lake lies within DRC borders. The lake sits on a rift valley that slows and pulls apart, this causing volcanic in the region.

Idjwi is the largest island on the Lake which is within the boundaries of the Virunga National park, the settlement on the shores of the lake include Kabare, Bukavu, Sake, Kalehe, Gisenyi, Kibuye, Goma which is in Congo and Cyangugu in Rwanda.

Lake Kivu is a fresh water lake located along with Lake Nyos and Lake Monoun, its known   for undergoing eruptions, geologists found evidence of the local extinction of every thousand years. The lake overturned in Lake Kivu.

There is a Buavu bay area of the lake which reveals the bottom layered of rare mineral interline with diatoms. There are three different intervals that are believed to be related to discharge of diatoms reducing the carbon dioxide levels low enough to precipitate.

The hypothesis with sufficient volcanic interaction with the lakes bottom water with high gas concentration sheathing the water, the methane is out of water.

Lake Kivu was recognized   and large numbers of people in the lake basin. Lake Kivu is understood just as the recent event at Lake Nyos.

Lake Kivu’s methane is originated to be a cheap natural resource for export and for generation of cheap energy.

There was an installation of a vent pipe at Lake Nyos in 2001 in order to remove gas from the deeper ends of water, however the solution would be considered more expensive. There is a problem that is associated with the prevalence of methane of Mazuku.

There is association of  methane is that of Mazuku  term evil  wind for out gassing of methane and carbon dioxide which kills animals and people, there is destruction of vegetation when high enough concentration.

Lake Kivu, is found approximately 55 billion cubic metres of biogas at a depth of 300 metres .

There was extraction of the gas done in small scale, which is used to run boilers at the Bralirwa brewery in Gisenyi.

The large scale exploits their resource which is concerned; Rwanda government is negotiated with a number of parties in order to produce methane from the lake.

There are a number of activities

Swimming, enjoy swimming at Lake Kivu the fresh water surface, there no crocodiles, hippos, bilharzias and many more.

Lake Kivu is very cool on hot days one can go at the lake to cool, relax on the shores, free to jump and do your activities.

The beaches are amazing with fine sand to relax in mild sun after a great swim.

However one can decide to enjoy better swimming pools including in towns of Kibuye, Cyangugu, Gisenyi.

The great views are fresh water bodies that walk of the shores of lake, viewing the cool breezes from the waves giving you a remarkable experience.

The water trips and cruise

The local dugout canoe used in boats, cruises on fresh water lake enables one to discover the land of Rwanda as one view the hills of Lake Kivu.

The boat cruise is found within the few meters of  the  lake as  one is having dinner ,the other long trips on the  island is in the lakes  especially the Napoleon and Amahoro island. Relax on cruises and water trips as you enjoy the experience of home away from home.

Nyamirundi Island is a coffee growing and processing company which is done in areas .the Island enables one to learn about the coffee and banana plantations.

The Imbabazi orphanage is a late Rosamond which takes care of the children who are left behind after the Rwanda genocide.

Both Rosamond and Dian Fossey lived in Rwanda as conservationist.

The orphanage   is constructed and built in beautiful gardens, a restaurant preparing classic and standard food which provides great amazing sceneries of the Virunga volcanoes.

Enjoy the kayaking equipment which is hired from Gisenyi, if one needs to relax after a long Gorilla trip they should visit the Lake Kivu.