River Nile : The most influential river in the entire world; the great Nile; is a blessing to many countries. The most famous river flows from Uganda towards the north via Sudan,t hen Egypt and pours its water to the Mediterranean sea. It’s believed to have its source from lake Victoria. The jewel of so many is home to many wildlife, flowing northwards pouring its water to the Mediterranean sea.it flows a distance of 4,130 miles, roughly 6,650 km long, with a depth of an interval of 26 to 36 feet, providing Egypt with fertile soil and water for irrigation. its truly a jewel for the desert states in North Africa.it carried about 300 cubic centimetres per day . The Nile is a wildlife sanctuary; a home for crocodiles and also consists of two Niles; the blue Nile and the White Nile that contribute to its water flow with the blue Nile estimated as the main water provider. 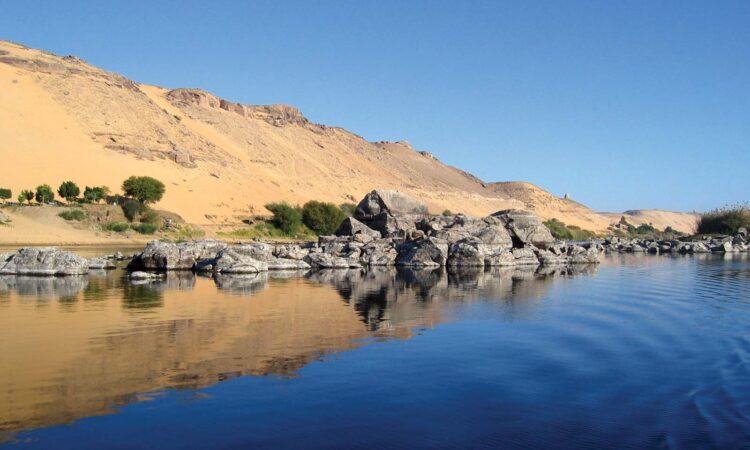 The grand name; Nile is a Greek word that signifies a valley or precisely river valley but (oomegakitara ) according to the locals. but according to the Egyptians, they refer to it as (iteru) meaning the river or sometimes ( AUR ) or black due to the sedimecolorour left behind annually.

Though Amazon River is ordained as the longest by researches ; the Nile is the giant in Africa passing in Murchison falls national park and also via lake Albert acting as a major source of hydroelectricity power in Uganda which is a lifeline to many industries and countries like Kenya, generated at the Owen falls dam. Did you know that the Nile flows through eleven countries that are to say Tanzania, Rwanda, Burundi, Democratic Republic of Congo, Kenya, Ethiopia, Eritrea, South Sudan, Sudan, Egypt and not forgetting the pearl of Africa, Uganda supplemented by three main tributaries; the white Nile, Blue Nile and Atbara .it’s a spiritual site. A domicile for wildlife hence it’s not only a support to humans but many as well sustaining many ecosystems both fauna and flora. Hosting various animals like the hippopotamuses, soft-shelled turtles, cobras, black mambas, water snakes, monitor lizards. The most spotted is the Nile crocodile; the largest species of crocodiles on earth.

An array of spectacular bird species comprising of majorly water birds dominating the riverbank can be sited at the Nile, Including the herons, egrets, ducks, geese among others waiting for bird lovers to uncover their beauty.

There’s a lot to take part in while at the Nile, it offers you a taste of the whole thrilling journey with great amazing activities to spark your entire adventure. A landmark to the Nile offers you; boat rides within the Nile, getting the site of the cool atmosphere observing the florae and faunas. As you boat ride, you can fish as well with your fishing gear or hire one in a feast to catch some fish. It’s great enjoying a fish caught by you.

Another thrilling adventure is the white water rafting and bungee jumping, which require quite braveness to adrenalize the whole experience hence enabling you to enjoy it to the fullest.

The John speke’s monument can be accessed and viewed while there. The explorer who discovered the source of the Nile. Tubing and sliding activities at the Nile contribute to the fun experience while at the Nile. imagine yourself sliding via those tubes then to the water, well that thrill is fascinating .

I presume that the Nile is a dear to every area it flows through, a support to many lives, a great unique destination to visit. and it’s only about one and a half hours from Kampala to that ancient river with wonderful adventure vibes.