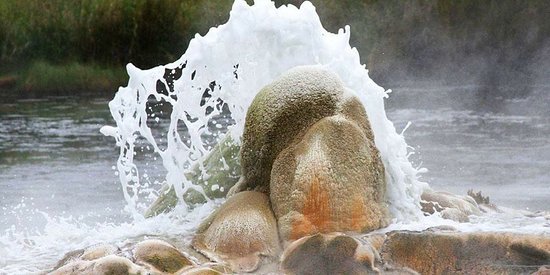 Semuliki National Park is exactly found on the southern shores of Lake Albert and is home to different wildlife. To see these hot springs you will trek through raised terrains which, is quite adventurous. On your trek you will see several wild species like mangabey monkeys, the red-tailed, and the colobus monkey not forgetting the vegetation diversity.

The hot springs are divided into two one as the male and the other female. The locals named the hot springs Sempaya from the Kiswahili phrase “sehemu mbaya” which means the difficult ride. They are divided into two the male and female. The hot water fiercely comes out of the earth’s crust with huge pressure and strength at 130 degrees Celsius producing a puff of clouds and steam which drapes up to 2km around the hot springs.  The bubbling hot water is intriguing once you reach it. The water is too hot that some tourists boil eggs and other foodstuffs to readiness.

Scientists explain that hot springs are formed geographically by the geothermal heat that boils the water underground which induces pressure hence breaking the earth’s crust through the different geothermal processes. As the water is making its way to the earth’s surface with the mighty pressure it rubs itself on the hard-warmed molten rocks hence gaining the high temperature. The temperature is high enough to boil simple foodstuffs and most tourists take off time boiling something at this spot.

However, while the geographical scientists explain it this way, the locals of Bamaga clam in the neighborhood have a different explanation leading to the formation of the hot springs. While some women had gone to draw water, narrates Mzee Adonia Balinsanga the head of the Bamaga Clan. At the exact site of the current male hot springs, they spotted an old man dressed in bark cloth wielding his spear with his dog following in the zigzag direction. He looked very weird so the women seemed frightened, they ran back to the village to recount what they has just seen to their husbands who brought him to the village and also married him a wife by the name of Biteeete. He continued to go hunting as usual with his dog but suddenly he never returned one day, so all the men in the village went on a quest to retrieve him they managed to get his hunting gear including his spear but he was never found. The place they found the spear stands in the present day as the male hot springs.

After rigorous searching but in vain, the men finally gave in and returned to the village narrating the ordeal to his wife. The devastated lady decided to go out to look for her husband. Heading to the wilderness, Nyamsibi never returned prompting the village members to look for her too but only her clothes were found at the site of the present female hot springs. The Bamaga believe these were their ancestors and they perform rituals at these hot springs annually.

In addition to the hot springs, Semuliki National Park has a lot to offer. The Semuliki river has its way through the game park which is a tributary to River Congo. The forest is home to the Batwa people; this particular sect of people is next to extinction and has a very interesting lifestyle for any tourist to enjoy. The forest is also home to multiple monkey species. If you are into bird watching it is a unique spot for you too. You also get to see quite a number of wildlife.