Top 4 National Parks in East Africa: When it comes to safaris we all want to have the most memorable time on our safari, we have a wide range of expectations from what animals we want to see, type of accommodation we would like to sleep in, how much adventure we would like to have and what place will give us the most returns on our money among others. 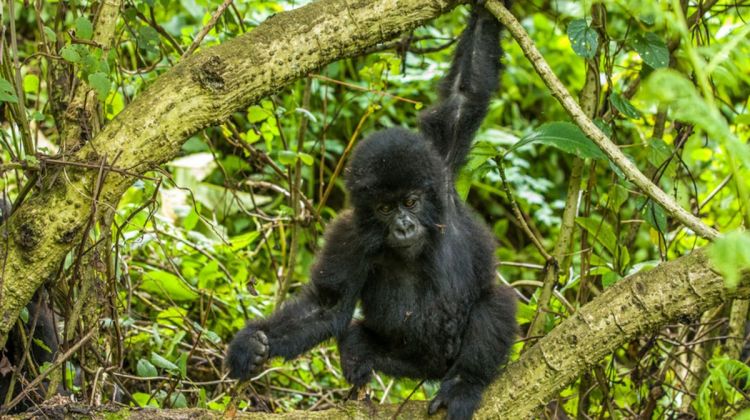 All these factors and more will always determine which destinations we end up at on our safaris and when it comes to visiting East Africa, we all want to visit the best National Park but our options are always so many because of the huge number of national parks in the different East African countries. so to help you narrow down your options and make your destination search much easier, we have made a list of the top four National Parks in East Africa that we feel will suit your taste and meet most of your safari expectations.

Top 4 National Parks in East Africa 1: Bwindi National Park in Uganda is one of the most visited parks in East Africa for one simple reason, the park is home over half of the world’s population of the endangered mountain gorillas. These famous primates live in the park’s Impenetrable rain forest from which the park gets its name. The ancient forest has over 320 tree species that on top of harbouring the endangered mountain gorillas harbour other 7primate species, 120 mammal species, about 200 butterflies and 360 bird species.

The park is located in south western Uganda and about 8 to 9 hours by road from Uganda’s capital Kampala, 3 to 4 hours from Rwanda’s capital Kigali and one hour flight from Entebbe international airport in Uganda.

This park is greatly known for its mountain gorilla trekking activity that attracts an average of 10000 tourists to the park annually; however the park also has other activities that tourists can enjoy which include: – birding, hiking, forest nature walks,  mountain biking and community encounters.

A visit to Bwindi National Park will not only give you an unforgettable mountain gorilla trekking experience but it will give you great nature sights, rich community encounters especially with the Batwa people and many more other compliment things that will make your safari worthy.

The animals in the Serengeti National park include lions, wildebeests, gazelles, zebras, giraffes, leopards, baboons, gazelles, elephants, hippos among other animals. It’s also known to harbour some birds and reptiles.

Visitors to the Park are always delighted at the great wildebeest migration that happens annually in the park as wildebeest, together with other animals like zebras and gazelles cross from Kenya’ Maasai Mara to Serengeti or from Serengeti to Maasai Mara. The park is next to the Ngorongoro crater so visitors to the park also get a chance to visit the crater.

Comprehensive game drives in this park will take up to 4 days though you can have a one day game drive to just have a few sights of the animals that are not deep in the wild. A visit to the park will give you a spectacular game experience that you will live to remember.

Tourist activities in this park include comprehensive sunrise, day and night animal game drives, witnessing the wildebeest migration, hot air balloon, exploring the moru kopjes, Bush dinners and camping under the stars among other things.

Accessing the park can be either by air or road. You can fly to one of the park’s seven airstrips from Kilimanjaro International airport or Arusha airport; depending on the flight and which airstrip your landing at this the total time for the flying option is between 2 to 5 hours including time taken to transfer from the airstrip to your accommodation.

By road it will take you 8 to 10 hours of travel time from Arusha to Serengeti National Park and in most cases you will have a stop for an overnight stay.

Budget, midrange and Luxury accommodation is available in and outside the park.

A visit to this park, will give you a wildlife experience like no other, you will see all the big five animals, most of the common and some of the most rare wild animals all in one place.

Top 4 National Parks in East Africa 3: Located in south western Kenya, Maasai Mara Game reserve is one of the greatest game reserves in Africa; the park borders Tanzania’s Serengeti National Park and is part of the Serengeti ecosystem. Maasai Mara game reserve is a 6 or more hours’ drive from Kenya’s capital Nairobi. Like Serengeti the park has a wide variety of animal species living in its bounds and it will take you about 2 to 3 days to have comprehensive game viewing activity in the park.

The animals in Maasai Mara include but not limited to the famous wildebeest that annually migrate to and from Serengeti and Maasai mara, impalas, antelopes, leopards, lions, rhinos, buffaloes, zebras, giraffes, cheetahs, topis, baboons etc.  The park also has water animals in the Mara River that include hippos and crocodiles.

You can also access Maasai Mara Game Reserve by flying to any of the park’s nine airstrips. The park has budget, midrange and Luxury accommodation in and outside the park.

A visit to this Park is a wild life wonder that you will not forget in your life time, you will also be amazed at the diverse flora that is in the park and its surroundings.

The park is also home to other primates and animals like the golden monkeys, forest elephants, buffaloes, spotted hyenas and many others.  The rainforest also harbours over 100 tree species with 29 of the species endemic to the Virunga conservation area.

The park is easily accessed by road from Rwanda’s capital Kigali and it’s a 2 to 3 hour drive to the park. The park has budget, midrange and Luxury accommodation is in and outside the park.

A visit to this park will give you a thrilling experience of the Virunga conservation area that will take your breath away.