Virunga Mountains local known as Mufumbiro are a chain of volcanoes in East Africa which is along the northern border of Rwanda, Uganda and Democratic Republic of Congo (DRC). 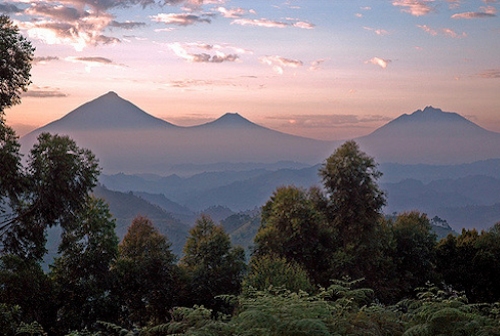 The volcanoes are located between Lake Kivu and Lake Edward, there named virunga because the name is derived from a Kinyarwanda word Ibirunga which means ‘volcanoes’.

The mountains consist of eight volcanoes, which are dormant, except Mount Nyiragongo 3580 metres and Mount Nyamuragira 3567 metres these are both in Democratic Republican of Congo.

The eruption once occurred in 2006 and 2010.Mount Karisimbi is one of the highest volcanos at 4,600 metres. Mount Sabyinyo rises 3,700 metres above the sea level.

Virunga Mountains are critically endangered mountain Gorillas, the habitat loss, poaching and war. Karisoke Research center the organization which was fund by Dian Fossey who was a conservationist observing  gorillas living in their natural habitat which is found between Mount Bisoke and Mount Karisimbi.

Mount Karisimbi is an inactive volcano in the Virunga Mountains which is at the border between Democratic Republican of Congo and Rwanda. Karisimbi is known to be the highest amount of the eight mountain ranges, its part of the Albertine Rift, the western branch of East African Rift.

Karismbi is flanked by Mikeno to the north part, Bisoke to the East and Nyiragongo to the west, the other region of the Rift valley .Karisimbi mountain is the 11th highest recorded mountain in Africa.

The word Karisimbi is derived from the local Kinyarwanda word which stands for snow, which is at times found in the dry seasons of June, July and August.

Mount Karismbi and Bisoke is where the name Karisoke Research center was created by Dian Fossey who was caretaker of the Mountain Gorillas in that area.

Mount Bisoke locally called Visoke is as well an active volcano, Virunga Mountains of the Albertine lift, the western branch of the East African Rift.

It’s located between the Rwanda border and Democratic Republican of Congo, the head qauters are l found 35km north of the town of Lake Kivu and Goma, and keeps adjusting to Lake Kivu.

Bisoke Mountain ranges in volcano by Rift action of which forms a divergent boundary of East Africa that slowly bisects the African plate.

The mountains height of 3800 metres this happened after the last eruption which occurred 1957. Bisoke is known for its largest crater lake of range.

Mount Bisoke  is  within the Rwanda Volcanoes National Park, Congolese Virunga National park. The steep slope of the mountain requires one to be physically fit since it may tend to be muddy.

Bisoke Mountain has a number of mountain Gorillas inhabiting the place and the Karisoke Research center fund by Dian Fossey in the valley to the west.

It’s located within two national parks there other activities that take place in the area including farming, mining and logging. Apart from trekking the mountain Gorillas, there is also hiking to the top of the mountain.

Rwanda Development Board leads to two day excursions nearby Mount Karisimbi. Its steep however walkable thou one must be physically fit.

Tourism  industry is devastated during the 1990s since there was  war  in central Africa these include the Rwanda civil war ,Congo war ,second congo war and Burundi civil war.

The mountain is derived from a Kinyarwanda word ‘Iryinyo’ which means ‘tooth’ also ‘Sabinyo’ ‘sabinio’ this is an extinct volcano in eastern Africa in the Virunga Mountains.

The mountain is found in the north-east of Lake Kivu, which is the African Great lake, west of Lake Bunyonyi in Uganda. It makes the intersection of the borders of Rwanda, Uganda and Democratic Republican of Congo, the mountain adjoins the Volcanoes National park, Virunga National Park, Mgahiga National Park.

There is a habitat for mountain Gorillas on the slopes. The mountain carries the local nickname ‘old man’s Teeth ’because it’s serrated summit which resembles worn teeth in a gum line (in contrast to the pefect conical summits of the adjacent mountains in this range.

Mount Gahinga is a dormant volcano in the Virunga Mountains which is at the border between Uganda and Rwanda .Gahinga is between Sabyinyo and Muhabura it’s the smallest. The word Gahinga is derived from a local Kinyarwanda word which means ‘small pile of stones’ it’s a swampy caldera on the peak.

Mgahinga Gorilla National park derives its name from Gahinga volcanoes. Mount Gahinga is an elevation of 3500 metres this is part of 8 volcanic mountains of the Mufumbiro ranges. This  volcano spans across, Rwanda, Uganda and Democratic Republican of Congo.

The vegetation is described as afro-Montana with bamboo which composes of main vegetation. Sabyinyo and Muhabura, bamboo forests on Mount Gahinga a habitat of the mountain Gorillas.

Mikeno is a Kinyarwanda word which means ‘poor’ its harsh slopes no human habitation. Mount Mikeno is found within the Virunga National Park,the mountain Gorillas are endangered having their habitat on the slopes of the Mikeno mountain.

Mount Nyiragongo is an active elevation, which is in the Virunga Mountains colliding with Albertine Rift.

Virunga National park is a Democratic Republican of the Congo, which is about 20km north of the town of Goma, Lake Kivu and west of Rwanda.

The main crater is two kilometers wide containing lava lake. The crate has two distinct cooled lava benches which is within the crate walls.

Mount Nyamuragira is a volcano found within the Virungas of the Democratic Republican of Congo, it takes 30km north of lake Kivu. Nyamuragira is derived from the Kifuru and Kishi this word mean herd cows, the word ngavu means cows.

Nyamuragira is known in history as the most active volcano, it has erupted for over 40 times since in the 18th century.

It’s located near the city of Goma of Democratic Republican of Congo, its 25km north of Lake Kivu