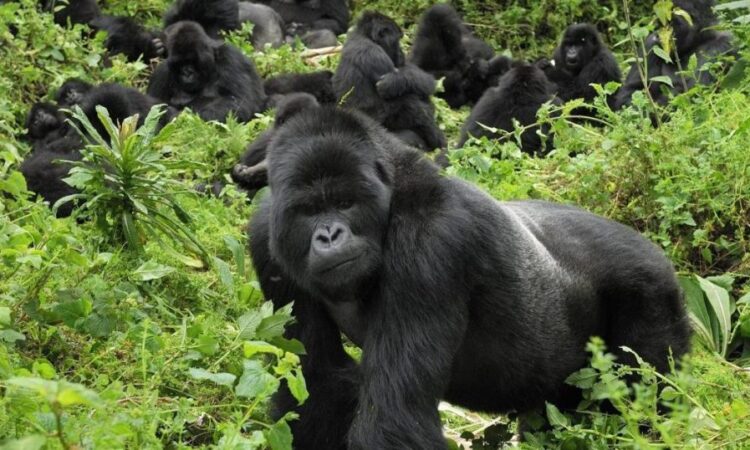 Mountain Gorillas in Bwindi forest are considered as a separate subspecies however it’s not certain yet by researchers.

Mountain Gorillas do not chase when you look direct in their eyes, however when threatened they will be aggressive.

When aggressive they beat their chests and out angry grunts and roars, the silverbacks that are the group leaders charge at the threat and mothers willing to fight to death for their children.

Mountain Gorillas live in groups of up to 30 members, largest gorilla groups or family led by a silverback.

A gorilla group is called a troop; the group includes females, black backs and young ones.

The male Gorilla who is over age is called a silverback; the name is originated from the silver stripes that develop on their backs when their mature. The silver hair is compared to grey hair of humans.

The  silverback Gorilla ensures that the family is well protected and maintained in order to decide all activities within the troop, the troop  schedules  trips ,feeding grounds, resting time ,playing time and many more.

Female Mountain Gorillas start reproduction from ages of ten and above.

Mountain Gorillas carry one or two babies and they go through a gestation period of eight and a half months, females bear between two and six offspring’s in life. These endangered giant primates, inhabit the in three countries including In Democratic Republican of Congo, Uganda, Rwanda, the activities are done throughout the year.