Facts about the Giraffes : The giraffe is a unique and outstanding mammal that has a very long neck as well as very long legs (approximately 6 feet long). Although their legs are very long, a Giraffe can run at an average speed of 35miles/hour. The amazing animals use t heir long necks to access food on the hire tree branches. On average a giraffe can grow up to 25 years while living in the wilderness and these can be seen during our exciting Uganda safaris in the different National Park. In Uganda, Giraffes, can only be sighted in 3 of the national parks including the Murchison falls national park, Lake Mburo national park and Kidepo valley national park. 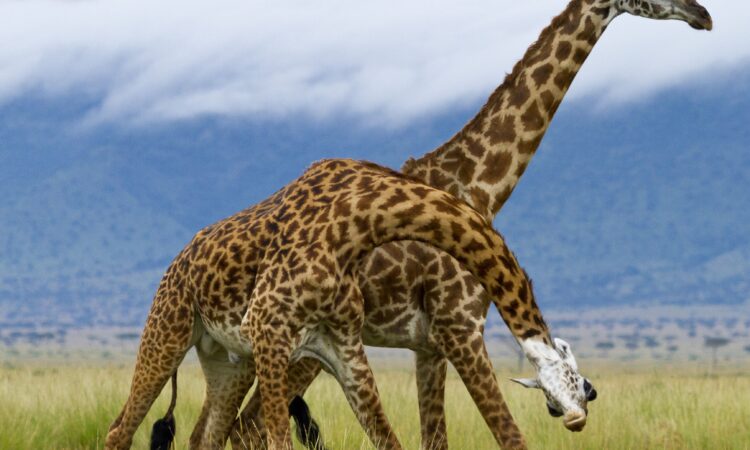 Although at a simple glance all giraffes may see to resemble, an interesting fact is that each one of them has its own unique pattern of the spots found on their coats. In this article we try to answer the frequently asked questions about and highlight a number of interesting facts about them

Do Giraffes Sit Down?

Yes, Giraffes do sit down, however because of their large bodies, they hardly do so. It is very rare to come across a giraffe sitting as this may cause a body imbalance between their long legs and necks.

Secondly, giraffes hardly seat because it is quite challenging for them to get back to a standing position if they have been sitting down, this makes extremely vulnerable to predators. While resting, they normal fold their legs below their bodies while they keep their neck up-straight watching out for any advancing predators.

Do Giraffes Sleep, and for how long?

As they sleep, they do not lay down. They simply curl high necks and remain standing. They do not lay dawn.  On average, the sleep for about half an hour (30 minutes) out of the entire 24 hours in a day. For their safety purposes, they tend to sleep in intervals of 5 minutes. They are very alert waking up every now and again. This explains why some people refer to the sleep as a basic nap.

How do Giraffes give birth to their young?

When the females are giving birth, they do so while standing. Its also believed that their hearts beat really hard (pump twice as hard) to pump blood up their neck to their brain. These animals are really unique.

What Do Giraffes Feed On (Eat)?

Typically, Giraffes are herbivore and feed on the buds, flowers, shoots as well as leaves of green vegetation including bushes, trees and shrubs. Occasionally they may eat some grass.  They use their powerful tongues to break these parts of the vegetation. They have a very tough mouth; this enables them to also eat prickly plants as well.

Thanks to their long necks, they can reach different plants thus boosting their diet. To satisfy their large bodies, it is said that giraffes spend over 75% of their day eating, and on average, an adult will consume up to66 pounds while on Uganda Safaris.

Because of their large size, giraffes require large quantities of food every day. They sometimes spend upward of 75 percent of their day grazing, especially in the dry season. A healthy adult will consume around of food when it’s available, although they survive on a good deal less when foraging is difficult.

Another interesting fact about the giraffe is that it can go for a while without drinking water. Similar to camels, they can withstand long periods of no water.

Is the colour of a giraffe’s tongue blue?

When a giraffe is feeding, it mainly uses its long tongue and this means that the tongue is exposed to the sunlight. So the dark coloration which the scientists say to be Melanin that presents as purple, blue or even black at times prevents their tongues from being sun-burned. However, if you are observant enough, you will notice that because the underside of the tongue is not always in the sun and doesn’t need any protection, it is pink in colour, Facts about the Giraffes.

Giraffes generally have strong prehensile tongues which can grow to a length of 20 inches. These they wrap around the higher leaves which they are going to eat.

Do Giraffes communicate with one another?

Yes, giraffes communicate with one another using vibrations plus infrasonic sounds just as dolphins. These animals are generally very peaceful and very silent so they hardly ever make any vocal sounds. They have been observed to use high pitched whistles and grunts occasionally.

How tall and big does a giraffe grow?

When we analyse an adult giraffe, its tongue is 21 inches long, its feet can grow to a length of over 6 feet, while its neck is actually longer. An adult Male giraffe can grow to a weight of 2,800 pounds then a female can grow to 1,750 pounds. Then a new born giraffe is approximately six feet tall.