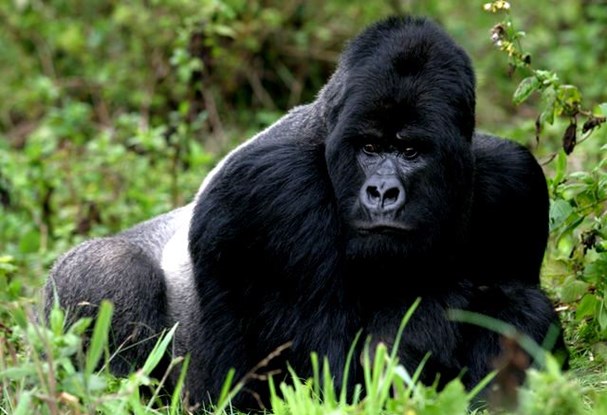 After birth female Gorillas stop ovulation for quite a number of years. There 2-6 young ones each time of delivery they approach makes to mating.

Gorillas often show signs of age at 35 years old, Gorilla group members always to adjust to Old Mountain Gorillas as they cannot feed and travel like members in the group.

Old Mountain Gorillas suffer from arthritis this is caused by damaging of bones in their arms and legs.

The moment the Silverback is old another group leader will take over .Mountain Gorillas loose teeth just like humans, different Gorillas have died in different old ages. And the oldest mountain Gorillas lived in zoo in Colombia but died at the age of 60years.

When a mountain Gorilla is getting older it will develop a white fur on their backs this becomes the reason of being called silverbacks.

A black back has about 10-20 kids from different female gorillas, gorillas are peaceful interact in fights when a silverback wants to leave his own family.

Mountain Gorillas feed on eating fruits, bamboo shoot, stems, and leaves and add on their diet with insects and small animals they cannot survive in the zoo but only in their natural habitats.

Book your Gorilla permit in advance pro to three months of your travel, the permit in Uganda is charged at a fee of 600USD, 1500USD in Rwanda and 400USD in Congo. Gorilla trekking takes 30 minutes to 6 hours in the forest well trekking you will be able to spot numerous primates, mammals, birds, waterfalls, trees, geckos and many more.