Queen Elizabeth National Park is one of the oldest, most famous and most visited national park in Uganda. Located in western Uganda 6 and half hours via Masaka from the country’s capital Kampala, the park was founded in 1952 as Kazinga park but was renamed Queen Elizabeth National Park, two years later to commemorate the queen’s visit to Uganda. The park is listed by UNESCO as a biosphere reserve for humanity and is twinned with Queen Elizabeth Country Park in England in a cultural exchange and conservation project. 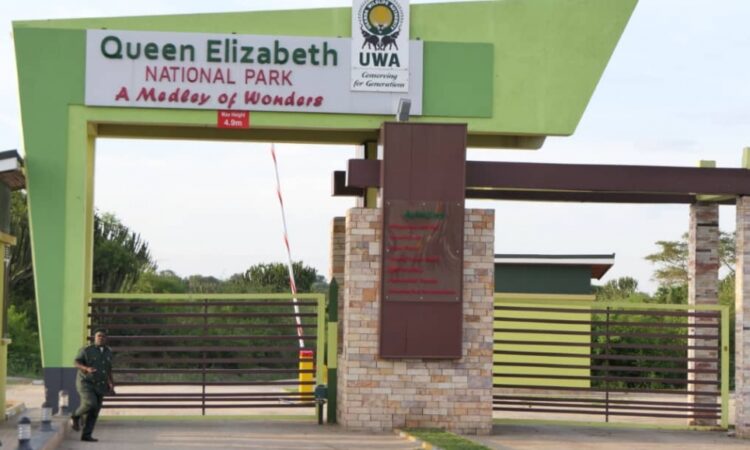 The park is a nature wonder boasting a manifold ecosystem of Savannah grasslands, bush lands, wetlands, forests and lakes; its home to kyambura gorge and maramagambo forest, one of the biggest forests in Uganda. The Park also spans the equator with an equator monument found at kikorongoro.

Queen Elizabeth National Park is a habitat to over 95 wild life species mostly found in the Ishasha section of the park; the species include but are not limited to the Uganda Kob, tree climbing lions, Hippos cape buffalos, waterbuck, warthog, hyenas to mention but a few; the park also has primates like the chimpanzee that are in the Kalinzu and kwambula section of the park.

With over 600 bird species, the park is the second highest national park in Africa that has the most species; the species you are sure to find at the park include the shoebill stork, black-rumpled buttonquail, flycatcher, pink-backed pelicans, papyrus, African skimmer and many more.

The park’s water scenery includes Lake Edward and Lake George that are joined together by the Kazinga channel, also being next to Mt. Rwenzori you’re able to see several explosion craters spanning from the mountain though the most prominent craters in the park are the Katwe explosion craters.

On a boat ride safari you get to enjoy the fresh waters of the kazinga channel, and the surrounding flora. While on the waters you will see numerous water birds and animals plus other land mammals coming to feed and quench their thirst along the river banks.

During game drives and game visits you will need a tour guide or ranger to take you around so that you don’t miss out on the most memorable experiences, but also since the community has encroached on the park, sometimes the animals are hidden and only the guides/rangers know where to find them; plus for the lion experience you need a lion tracking device to easily find the lions.

If you are up to it you can trek the famous chimpanzees in kyambura gorge. Yes, the gorge is home to some primates though they are rare to be found, but when you find them you will be pleasantly amazed at the beauty these mammals that share about 95% of their DNA with humans.

At Queen Elizabeth National Park you will be thrilled at everything from boat cruises, indulging in bird watching, take trekking to see the chimpanzees, take part in nature walks to appreciate the natural beauty of the area and engage in community walks to activities to get to know the people of the land better; you will be left amazed. So plan your visit soon, contact us and let’s help you plan and amazing trip and Uganda safari to this wonderful park