A shoe bill stork is a primeval sizable stork bird with a height of 110-140cm and weight of 4.9 – 5.9 Kg with males weighing slightly more than the females. The main feature of this bird is its enormous shoe-shaped bill hence the name shoe bill. It can also be called shoe billed stork, whale head or whale headed stork. The bird has a short and wide neck and during flight it has a wide wing span and retracts the head and neck to thrill while on Uganda Safaris. 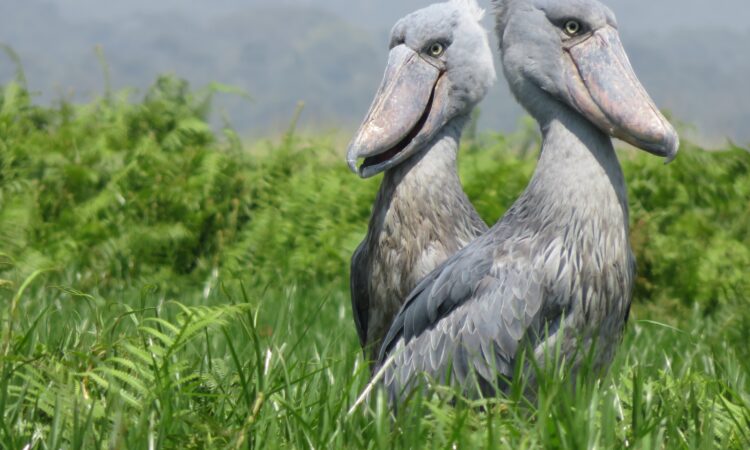 Adult shoe bills are greyish well as the younger ones are brownish. The bird has large feet though not webbed like other water birds. Despite the not webbed feet the shoe bill can still it can still surreptitiously move in water to catch its prey.

The shoe bill is a solitary and quiet, it’s territorial and very protective of its territories. The shoe bill lives along water bodies because its main food is lungfish though can also feed on frogs, water snakes and wide animals. When hunting the shoe bill will stand still and wait for the unsuspecting fish then it will use the sharp edges its muzzle to decapitate its prey and remove unwanted vegetation from the catch.

This bird is known for monogamous relationships and mates between April and June. The female lays eggs but both male and female contribute to the incubation period which lasts a month. New-borns have modestly sized bill and are fed by the mother till they are able to fend for themselves.

The shoe bill has the ability to stand for a long time; you may think it’s a statute. This bird can be aggressive but is weary of human beings and in captivity they are gentle docile birds.

Though the bird has a long life span of 50 years or more, its numbers are declining because of habitat destruction, hence the bird is endangered and can rarely be seen.

In Uganda, these birds can be seen in the parks below:-

The beauty is you can see all these birds all year round in all parts of Uganda; in the national parks and forested areas.

Also most birding safaris are coupled with other activities so you actually get much more than just birding. The other activities include but are not limited  to mountain gorilla trekking, chimpanzee trekking, Savannah game viewing, boat rides, nature walks and many others. You should know though that the activities you can do, are hugely determined by the place you have your bird watching experience from. Thus all places don’t have the same activities but each place has unique activities.