Silverback Gorilla Facts : The fact about a silverback gorilla is a mature male endangered mountain gorilla that develop silver saddles across his back and hips, they are the one responsible for protecting and leading a troop of 10 to 30 individuals on where to migrate, feeding sites and resting. 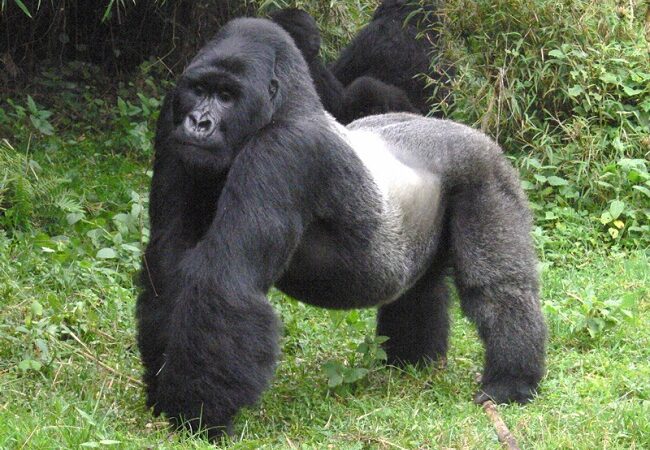 Below are the major facts and information habitat on the silverback gorilla as follows;

Silverback mountain gorillas live in the nature habitat of tropical rainforest of East and Central Africa.

They have average height of 6 feet.

Gorillas in the wild have average lifespan of 40 to 50 years.

Mountain gorillas are one of the two subspecies of the Eastern gorillas that live in the mountainous forest of East and Central Africa. Along with Chimpanzees and bonobos, gorillas are considered to be one of the largest ground primates.

When we compare mountain gorillas to other species of gorilla, they have thicker and longer fur. Like other great apes. They have longer arms than legs.

Mountain gorillas are terrestrial and quadrupedal primates meaning they spend more time on the ground than in trees and walk on four limbs.

Despite their huge size, mountain gorillas can climb fruiting trees to feed their diet.

They have thicker fur that supports them to live at high altitude and in colder climates. Mountain gorillas inhabits the Albertine Rift cloud forest and the Virunga Volcanoes in Central Africa.

They can wonder in home rangers of 10 to 15 square miles.

A mature male mountain gorillas are called silverbacks because when they grow old their bodies turns into silver saddle that runs across their back and hips.

An average silverback height measures up to 6 feet tall while female mountain gorillas as an average up to 5 feet tall. Gorillas can weigh up to 350 pounds with a stocky build, muscular arms and broad chest thus making them the largest among the primates.

Gorillas are herbivores and silverback can eat a variety of root, fruit, herb, bark, bamboo and sometimes ants and insects. In order to sustain their body can eat up to 66 pounds of food per day.

Besides silverbacks, male mountain gorillas are distinguished by their pronounced bony crest on the top of their skulls which gives their head a conical shape.

More so, they have relatively small ears for the size of their heads.

Younger male mountain gorillas are named ‘’Blackbacks’’ because the silver saddle will only occur at the age of 12.

Despite they are strong mammals, silverback gorillas are shy and gentle. They live in troops comprised of 10 to 30 members. An adult silverback   serves as the alpha and leader of the family. Apart from protecting the troop, the alpha silverback also leads them where to travel, forage for food and sleep. In case of any fight with other animals, silverbacks stand erect on their hind legs, tear and throw plants, stomp their feet and drum their chests with their hands.

Gorillas are nomadic, so they can build new nests each days. A troop that is composed of several younger males, adult and juvenile females and infants.

When male gorillas reach sexual maturity, they decide to leave the troop and travel alone till they can make their own troop to lead.

Like other great primates, silverbacks are intelligent apes. They can also communicate through Vocalization, gestures, facial expressions and body language to communicate with others.

When the mother dies in the group, then silverback will look after the young ones and allow them to sleep in his nest.

Gorillas are typically quiet and shy; they charge back unless an intruder confronts a silverback to take over the group.

Most of the time conflicts are resolved through display and not in fight. Silverback cares for his group and rest at midday and can spend almost 13 hours sleeping. During this time, they can play, groom and forage with members of the troops.

According to ‘’IUCN’s’’ Red List, mountain gorillas are considered as endangered species because of the following cause;

They face loss of habitat due to human encroachment.

Poaching is commonly done in them inhabits where poacher kill gorillas for bush meat trade which is illegal.

But the conservation effort has been put in the place to conserve these critically endangered mountain gorillas through working together with stakeholders able to preserve their habitat.

Besides key facts about a silver back, here are other additional mountain gorilla’s facts as follows;

When female mountain gorillas reach the age of ten are considered sexually mature and able to bear offspring. After 8 and half month of gestation, female gorillas normally give birth to a single baby. Generally, giving birth from two to six babies in their lifetime.

Female mountain gorillas have an inter birth period of 4 to 5 years before they give birth to another baby.

Newborn gorillas are weak like human babies. They can be weaned at 3 and half years and tend to stay near to their mothers till the age of 4. At this time, they can be feeding on the same diet including plants, fruit and shoots.

Gorillas rarely drink water but usually hydrate themselves by feeding on moist plants and fruit.

They can identify their group members through their nose prints which is also one of the Silverback Gorilla Facts.

Gorillas are like humans, of hosting 32 teeth but with very sharp canines.

When excited, silverback have large apocrine glands in their armpits responsible for hiding a pungent odor.

Lastly, Silverback gorilla is quite unique species responsible for all activities done in the group and best way to enjoy its beautiful nature is to plan a trip to one of the Gorilla safari destination that is; Uganda’s Bwindi Impenetrable Forest national park, Rwanda’s Volcanoes national park and Congo’s Virunga national park.