Sipi falls, has three waterfalls in the Eastern part of Uganda it’s located in the district of Kapchorwa, northeast part of Mbale and Sironko. Sipi falls lie on the edge of Mount Elgon National park which is located at the Kenyan border. 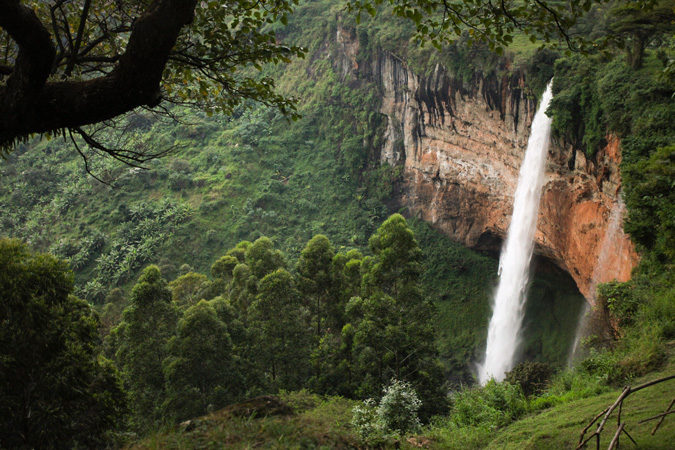 These falls are a starting point for all the hikes to Mount Elgon. One of the hikes starts at Budadiri which follows the Sasa trails to the summit which later on descends down the Sipi trails.

Hiking around the falls offers amazing stunning views of the Karamoja plains and Lake Kyoga at the slopes of Mount Elgon.

One can organize tours through the Uganda wildlife Authority or private operators to be able to visit these amazing Sipi Falls.

There are a number of lodges, campsites, and backpackers in the area, that range in all budgets from midrange, luxury and budget lodges.

Sipi falls is a starting point for most of the hikes of Mount Elgon. The popular route is Budadiri which is followed by Sasa trail to the summit which descends down to the Sipi falls.

Sipi falls, is one of the best areas to relax, unwind from the hustle of cities and towns, since it’s on the foothills of Mt Elgon. The Sipi falls have other activities at the mainstream river around Jinja town, rolling rocks and it’s a one of the rocks where the Italian climbers were trained. This was after abseiling along the main 100m Sipi falls. There are over 15 bolted sport routes, hikes near the local area to visit the waterfalls.

Sipi falls is named after a plantation called Sep, its located near the banks of the River, and it’s in a banana wild form. The Sep is a medicinal plant and its believed for treating fever and measles.

Sipi Falls is famous for the Bugusu Arabica coffee. The coffee grows between 1,700 and 1900 meters. The Bagisu coffee tours can be organized by tour operators through well-informed guides who are fully informed about coffee farming, processing, and roasting.

Sipi falls has a number of tourist activities in the area including:

Hiking and Mountain climbing, the mountain climbing to the top of Mount Elgon can be accomplished in a number of 4 days. The climbers move with porters and guides who help along the hike to ease your load.

There are tents where you can be accommodated, carry dried food as well, since most of our local dried foods are not plenty. There are lower elevations of the trails where one can hike on a full day or half a day, however, with this hike you will need to carry your packed lunch from your lodge.

Mountain Bike trails: Sipi falls, Mountain biking trails its one of the activities to encounter on the fourth tallest mountain in Africa.

There a number of trail heads in foothills of Mount Elgon which are perfect within a day or half a day in nature walks with Uganda Wildlife Authority see a flora and fauna.

Rock Climbing; enjoy a Rock Climbing on Mount Elgon National park in the area of Sipi falls. It’s a very safe activity one can enjoy for Adventure activities.

Trout Fishing in Sipi falls National Park is one of the falls at Mount Elgon, take your lunch, drinks then the guide will take you for the fish trout. Trout Fish, on Sipi River to catch the Nile Perch in Murchison falls park.

Bagisu–Imbalu Circumcision: This is a cultural practice where every male Mugishu is circumcised which is done publicly. A number of people including visitors come together for the colorful event; however, no pictures are allowed to be taken. This activity runs from August and December however more of the males engage in the month of December.

Nyero Rock paintings: This trip takes one day and one needs to have packed lunch which you can enjoy near the rocks, where the first inhabitants dwelled. Nyero Rock paintings have lived for more than a thousand years, however there other rocks nearby. Nyero Rock is also a stopover for clients travelling to Kidepo National park. Explore the Adventure and discovers a lot in the wilderness.