The Uganda Martyrs : This is a group of 45 men in total that allowed them to die for their Christianity faith. The Uganda martyrs include 23 Anglican converts and 22 Catholic converts. The Catholic converts were the first African saints and Uganda prides in this. The massive killing was ordered by the King of Buganda, Kabaka Mwanga II who had taken over the throne after the death of his father Kabaka Mutesa I in 1884. The order for their execution was issued on 3rd June 1886 on grounds that newly taught Christianity values undermined the traditional beliefs. To this date, 3rd June is celebrated worldwide as the feast day of the Uganda martyrs. The Catholic martyrs were beatified by Pope Benedict XV on 6th June 1920 and were canonized by Pope John Paul VI on 18th October 1964 making them saints fully recognized by the Roman Catholic Church. 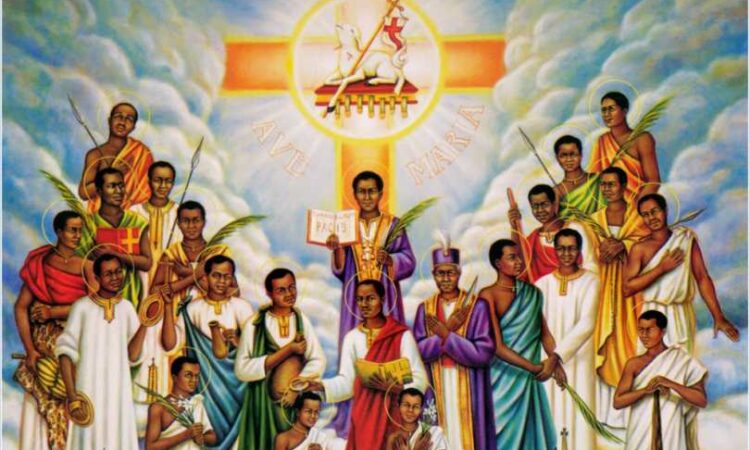 Kabaka Mwanga’s father Kabaka Mutesa I invited the missionaries to Buganda through an open letter that was written on his behalf by Henry Morton Stanley a European explorer. Many missionary stations in Europe received this letter with good intent hence paving the way to the arrival of missionaries to spread Christianity. In 1877 the first group of missionaries arrived and these were Anglican after two years in 1879 the Roman Catholic missionaries joined Buganda. Most missionaries arrived in the reign of Kabaka Mutesa I so they settled comfortably and within no time they managed to convert many.   As a prince Mwanga liked Christianity but when his predecessor died in 1884 and is duly crowned king he realized that Christianity was against many traditional beliefs that included sacrifice to traditional gods and polygamy. The some of the Christianity teachings thwarted his power making him jealous. He grew strong hatred for Christianity because he felt like his power as king was reducing.

The first recorded martyrs were murdered on 31st January 1885 at the current day Buseega, Nateete including Yusuf Rugarama, Nuwa Serwanga, and Makko Kakumba. Joseph Mukasa Balikuddembe who was Mwanga’s advisor was beheaded at Nakivumbo for pleading with Kabaka Mwanga not to kill Bishop Hannington who was being held hostage in Busoga for entering Buganda through the wrong direction which was considered a taboo. Kabaka Mwanga was so furious about his advisor siding with the people he considered his enemies which only accumulated his anger towards Christianity and that was the genesis of the massacre of all Christians who refused to denounce Christ. Christianity was fast spreading which worried Kabaka Maanga and on 3rd, June 1886, all Christians that remained to profess the faith were rounded up from their different localities speared, butchered, and burnt to death. The majority were made to collect firewood which was used to burn them and was also made to trek long distances while being battered, walking from munyonyo to Namugongo.

At the death spots of the Uganda, martyrs monuments were raised including churches and statues. Common places include the Catholic church at Munyonyo and one is named after Joseph Balikuddembe in Kampala. The most outstanding is the Uganda martyrs shrine in Namugongo for the Catholics and Nakiyanja also in Namugongo for the Anglican community. 3rd June, every year a massive number of people from all over the world make a pilgrimage to the Uganda Martyrs Basilica in Namugongo to honor Africa’s first saints. The shrine’s architectural design is that of an African hut comprised of 22 copper pillars which are about 100 feet tall. Started construction in 1967 and completed in 1975 the Uganda Martyrs Shrine is a historical landmark that anyone visiting Uganda can’t afford to miss out on. At the spot where it was constructed is where Charles Lwanga was murdered and also because a majority of the martyrs were killed in Namugongo. The place is open to visitors during the entire year but very crowded during the days nearing the Uganda Martyrs’ festivities.