Wildlife in Rwanda : Rwanda is visited by numerous individuals who are delighted to explore its nature and wild beauty. People visiting Rwanda are thrilled to get an opportunity to see wild creatures in their nature habitats going on with their day to day life. Rwanda is home primates as well as other savannah animals that include:- 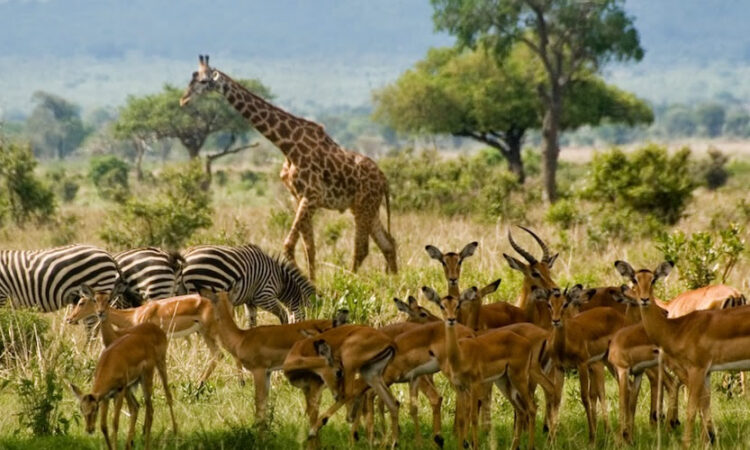 Mountain gorillas are the top most visited animals in Rwanda. The huge apes that make their home in Volcanoes National Park are not just exciting to see but getting to them offers its visitors an adventure as they trek the mountainous forest to get to the mountain gorillas.

Next to the mountain gorillas the other famous primates in Rwanda are the chimpanzee found in Nyungwe national park. Seeing these primates is also done on a trekking experience – chimpanzee trekking.

The chimpanzees in Rwanda are found in cyamudongo forest and Nyungwe forest, trekking habituated chimpanzees in the forests is done any time during the year at cost determined by the park or Rwanda Development Board.

Other primates found in Volcanoes National Park are the golden monkeys. The golden monkeys are a part of the monkey family but unique because of their golden colour. They also have interesting behaviour that will intrigue you as you visit them in their habitat. Unlike the mountain gorillas, the monkeys stay in the lower ranges of the forest so it’s easy to find them and the trek won’t take that long.

On top of the big five you also get to see several other animals that include but not limited to the early risers like the kobs, impalas, oribi, bushbuck, elands, topis, zebras, giraffes, antelopes, waterbucks, warthogs, oribis, duiker klipspringer, cape land and many other animal species. You get to see all these animals on game drives in the early mornings, during the day or in the evenings in Akagera National Park. During the evening game drives, you will get to see the carnivores in the park hunting their prey for dinner like the leopards and the lions catching their prey.

If you are a bird lover, you will also have a chance to see over 400 species of birds in the different places of the country namely the all the three National Parks, Volcanoes National Park, Nyugwe National Park and Akagera National Park plus at the twin lakes. The birds in the country include but are not limited to handsome spurfowl, Honey guide, papyrus gonolek , albertine owlet and very many more to thrill while on Rwanda Safaris Tours.