Cultural Practices in Uganda :Uganda is one of the best tourist destinations in Uganda no wonder Sir Wilson Churchill named it the pearl of Africa in his book the African journey. Its called the pearl of Africa because of the various animal species, the vegetation, good climate, and above all the good people, Uganda is unique and outstanding because its among the only eleven countries with the big five animals.it also doubles as the source of the longest river, the River Nile. The great Nile has its source. 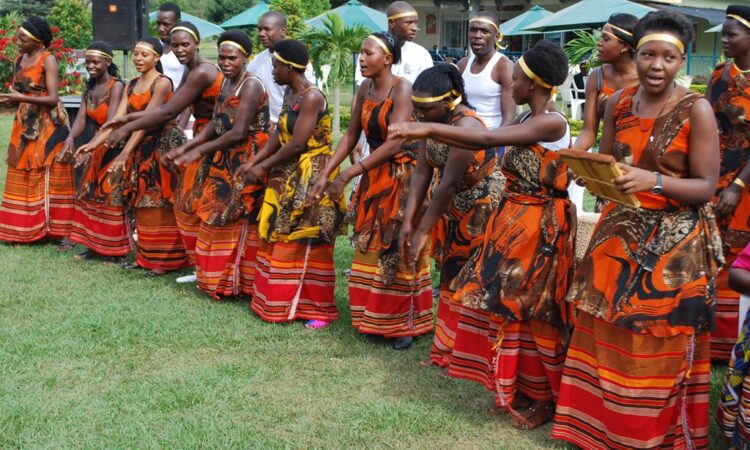 There estimated to be 45 people in Uganda speaking over 56 languages, the country is divided into four regions including the Northern, central, Western, and Eastern. There are over four different ethnic groups in Uganda each settled in the different regions of the country. Each tribe has a different way of dress, political, social and economic organization making Uganda a multicultural country.

Each of the different tribes has different foodstuffs commonly known as staple foods, the Bantu tribes of Banyakole,banganda rat matooke but some of them consume a lot of millet and potatoes.The tribes of the Bashiga, Banyakole, enjoy their millet “Kalo” with “fishable.”The Nilotics enjoy bingled millet called “Atap” usually accompanied with different sources like”marakwang” .The other food crops produced in Uganda includes cassava, potatoes,maize, rice, yams and vegetables among others. Uganda’s International foodstuffs are the “Rolex” and “nsenene” fried grasshopper which is seasonal. Rolex is constituted of eggs and chapati blended in a rolled form.but certain foods were forbidden like the batooro were forbidden from eating pork, fish, chicken and eggs mostly to women. they were considered Taboo. Beer parties and feasting mainly during great celebrations like after a great harvest among the acholi to share the blessings, it was all a merry with alot of singing, people contributed their best foods and shared among themselves.in this occasions is where potential partners meet.

All these tribes have a specific attire they wear, the Baganda are known to wear bark cloth in the past years but now they wear gomesi, all tribes in the western wear ” mushanana “during special occasions like marriage ceremonies and also when going for visits, these dressings reached till the legs which was a sign of self respect. the iteso wear “asuka” which is a wrapped kitambi cloth, and the karamongs wear “”.These attires portrayed their cultures. The married women dressed more respectful and they were looked upto by the young girls.

It is considered sacred and holy, people were advised to court before getting married, that period of courtship is where you get to know each other, your clans to avoid inbreeding, and you decide to get married incase nothing is contradicting, the boy and his people come to the girl’s family to discuss about the bridal gifts, this occasion is called “kukyala”, and these gifts differ from one tribe to another.in teso, cows, goats and sheep are brought as bridal gifts while in Buganda, one thigh of a cow, relaxing chair”mamakonye” and the kabaka’s portrait are offered as bridal gifts. Courtship is highly emphasized before marriage, because there was a lot to consider before marketing, from the clans, family backgrounds this prevented incest since every detail was cleared before marriage. Bride price is given as appreciation to the girl’s family inform of gifts, every family with girls looked forward to getting bride price.it cuts across all the tribes except that offer different bridal gifts.

This is behaviour during social occasions mostly good morals were emphasized, specific norms and values were put in place and they were supposed to be followed, among the batooro, people were expected to eat slowly to appreciate the food and it was done while sitted properly even moving faster was not allowed because it was undignified.

Each tribe have practices they do, these practices were done by their ancestors during the past and passed on to their young generation most of them involved gatherings, brewing, dancing and singing. melody was all around the atmosphere during those practices because they believed their ancestors and gods were pleased. Most of them involved giving of gifts like those who succeeded in circumcision were rewarded with gifts like cows, goats which would help them in their marriage time. every practice had a reason behind it. the elders in the society were sought before doing any practice because they were experienced, knowledgeable just as the African proverb”what an old person sees while sitted can’t be seen by a young person standing.”

Naming ceremony; in an African family, a baby was received with a lot of joy because it was a blessing from God, a new addition to the family. after some days, the baby is given a name, among the batooro, a baby boy was given a name after 4 days while a baby girl after 3 days, also the circumstances of the day or period the baby was produced was also considered when choosing a name. for example.  Pet names are also given according to the banyoro and batooro.it involved alot of feasting.

Circumcision; well known practice among the bagishu people, done mainly to adolescent males, which involves the cutting of the outer part of the Pennis to reduce chances of contacting HIV/AIDS . during this practice, a special dance is organized called “kadodi” ,in this dance, the women tie dry banana leaves around their waists and they shake their bodies as well stop as the boys. There was brewing and taking of alcohol, boys to be circumcised were paraded, holding sticks while looking up as they were circumcised, those who were successful in it were looked as men and they rewarded with gifts .