Eastern Lowland gorillas : The eastern lowland gorilla found in the Democratic republic of Congo they are also known as Grauer’s gorilla. They are the largest of gorilla subspecies in the entire world. 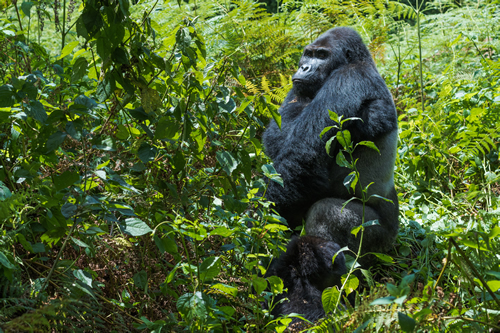 You can tell them apart from others by their stocky body, large hands, and short muzzle. Though they are big in size, eastern lowland gorillas survive mainly on fruit and other forest foods like all the other gorilla sub species.

They live in thick tropical rainforests, where they find plenty of food for their vegetarian diet. They eat roots, shoots, fruit, wild celery, and tree bark, and pulp. In the Democratic Republic of Congo they live in Kahuzi Bhega

They may pulp but the eastern lowland gorillas can climb trees though they are usually found on the ground in communities—known as troops—of up to 30 individuals. Troops are led by one dominant, older adult male, often called a silverback because of the swath of silver hair that adorns his otherwise dark fur. Troops also include several other young males, some females, and their offspring.

The leader organizes troop activities, such as eating, nesting in leaves, and moving about the group’s home range. Though gorillas can stand upright, they prefer traveling on all fours, pushing themselves forward with the knuckles and soles of their feet. When challenged by another male, a troop leader will demonstrate his strength by standing upright, throwing things, making aggressive charges, and pounding his huge chest while barking out powerful hoots or unleashing a roar. Despite these displays and the animals’ obvious physical power, gorillas are generally calm and nonaggressive unless they are disturbed.

When they are not communicating you may think these eastern lowland gorillas are actually quiet but they have an extensive array of vocalizations—at least 22 different hoots, barks, and screams, each with its own meaning. In captivity, these gorillas have displayed significant intelligence and have even learned simple human sign language.

The female gorillas like the mountain gorillas give birth to one infant after a pregnancy of nearly nine months. Unlike their powerful parents, newborns are tiny—weighing about four pounds—and are capable of doing no more than clinging to their mothers’ fur. These infants ride on their mothers’ backs from the age of four months through the first two or three years of their lives. Young gorillas, from three to six years old, spend much of their day at play, climbing trees, chasing one another, and swinging from branches.

Lowland gorillas are habitually very difficult to habituate compared to mountain gorillas, however, the Democratic Republic of Congo and the Central African Republic offer the only chance to track one of the two habituated lowland gorilla groups in the world!

As with tracking mountain gorillas there is a strict distance rule when tracking the lowland gorillas of at least 7 meters. This distancing is to prevent the transfer of any human diseases which could potentially wipe out an entire gorilla family in a matter of weeks.