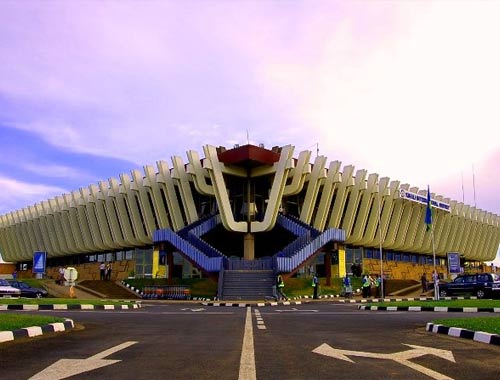 Kigali International Airport is located in the capital city of Rwanda – Kigali. It’s the gateway for all destinations and tourist hubs in the country. It acts as a transit airport for Bukavu and Goma in the Eastern Democratic Republic of Congo.

Kigali International airport is located in the suburb of Kanombe, which is found on the Eastern edge of Kigali, and it takes 5 kilometers by the road, east of the central business district of Kigali.

Kigali Airport was a strategic point during the Rwanda Civil War, and the country is a landlocked country. This airport has two runways, however, one of the runways is currently closed, and this was after the request from RPF. This was the cause of the renewal of civil war and the beginning of the Rwandan Genocide.

Currently, there are three terminals at Kigali Airport. The two terminals were built to replace the single-story building which now is a VIP station. The main terminal can handle over 6 small aircraft and a Boeing jet of 747. One of the runways has two helicopter pads both can pass through the main runway, and these pads are used mostly especially for military helicopters.

The cargo terminal is found at the airport and there was an upgrade to the tarmac, and the airport offers free WIFI in the waiting area.

Kigali Airport is ranked as the 7th in the whole regional airports of East Africa. This was after its capacity to respond to disaster, through the fire department.

Kigali Airport is the home to Rwanda Air and its head office is located on top of the airport main building. Before, the airline had its office in the centenary House in Kigali. Currently, Akagera Aviation and Rwanda Civil Aviation Authority have their offices located at the airport.

Kigali Airport is to be replaced in the new airport which is located in the south part of Kigali the side of the Nyabarongo River in Bugesera. This new airport is needed as an existence airport and does not allow upgrade on the runways. This is in the provision that the construction of the airport was planned in 2015. The contract was between the Rwandan government and Mota-Engil Engenharia e construcao Africa in South Africa.

Kigali Airport is the entry port for all tourists who have tourist activities in Rwanda to visit Volcanoes National park a home to the Mountain Gorillas, Akagera National park, Nyungwe National park and many more.