Gorilla Habituation is an interesting safari experience where a traveler gets a chance to enjoy the presence of being up close with the mountain gorillas for long. Gorillas are some of the endangered species of mammals that still live in Africa. These mountain gorillas have been a center of attraction for over the years and tourists have been flocking the national parks in Africa to spot these primates in their natural habitat. The endangered mountain gorillas live in the dense tropic forests of Africa and one has to trek them in order to find them. A lot of projects have been set up to bring these primates to the open-world or get to be known by the world through the habituation process done by different organizations and government bodies. 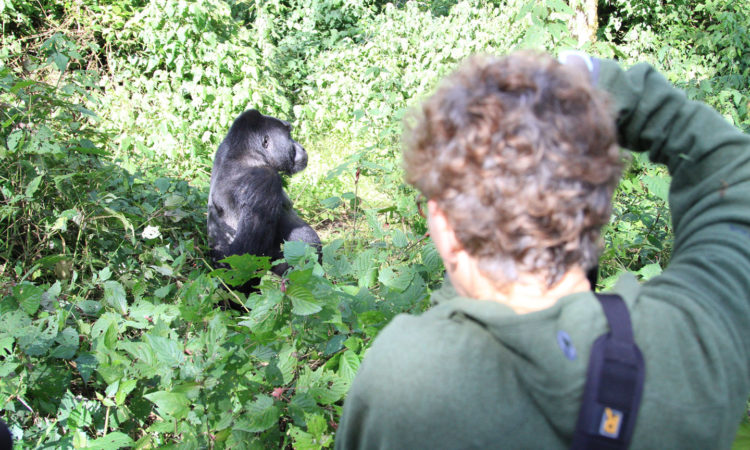 Habituation of gorillas is a process that involves a team of researchers and rangers that visit a particular family of wild gorillas every day until it gets used to these researchers. After some time, the researchers are able to record and identify the individuals of the group basing on sex, age, behavior plus assigning names. Once the research is done, then the gorilla family can be visited by tourists. However, to be confident that it can be visited, they conduct a mock exercise for 6 to 8 months and once it is successful then you can visit these habituated gorillas.

Uganda and Rwanda have the largest number of these endangered gorillas and this has enabled them habituate a pretty good number of gorilla families that are open for tourism and research. The process of gorilla habituation can take from 2 to 3 years to be completed. In Uganda, a group of researchers operates under the Department of Research and Monitoring which is under the Uganda Wildlife Authority.

Most of the gorilla habituation process started in the 1960s with the aim to protect and conserve the primates. In the past years, gorillas have been hunted and killed for their meat and pet markets by the poachers. Different organizations mostly the government bodies came up to develop and gazette areas for these endangered mammals. Bwindi Impenetrable National Park in Uganda contains about half the population of the mountain gorillas started habituation in 1991 after it was established in the same year. Started with 2 families and now has over 12 habituated gorilla families. For the Virunga Massif’s national parks, the efforts to protect and preserve the mountain gorillas started in the 1960s up to date. The funds for preserving and protecting these primates have been highly gotten from gorilla tourism activities that generate funds to support the projects.

In the Virunga Massif, which is shared between Uganda, Rwanda and the Democratic Republic of Congo, 20 gorilla groups have been habituated and Uganda’s Mgahinga National Park has one family known as Nyakagezi and more than 10 gorilla groups have been habituated in Volcanoes National Park such as Umubano Group, Amahoro group, The Agashya Group, Kwitonda group, Hirwa group, Bwenge Group, Ugenda group, Sabyinyo group, Susa group (A) and Susa group (B) that live in the dormant volcanoes of Volcanoes National Park.

Additionally, different government bodies operate and supervise the projects of preserving and protecting the gorillas for example in Uganda, Uganda Wildlife Authority and in Rwanda it is Rwanda Development Board while in Democratic Republic of Congo the national parks are operated under Congolese Institute for Natural Conservation.

The habituation experience was established in the southern region of Rushaga sector of Bwindi Impenetrable National Park in 2014. Two groups have been habituated under this program such as the Bikyingi gorilla family and the Bushaho gorilla family. Bikyingi family is situated in Rushanga area with 21 members including 1 silverback, 9 adult females, 2 sub-adults, and 9 infants while Bushaho gorilla family is situated in Nkuringo sector with 8 members including 1 silverback, 3 adult females, 1 black back, 1 sub-adult, 1 juvenile, and 2 infants.

Gorilla habituation rules and regulations are quite similar to gorilla trekking and some of these include the following;

What is the difference between gorilla habituation and gorilla trekking?