Gorilla trekking in Africa is the highlight tour that attracts thousands of tourists to visit the three countries Uganda, Rwanda and Democratic Republic of Congo and this is the major reason as to why very many people prefer visiting these destinations. However, mountain gorillas are critically endangered mountain gorillas in wild which share almost 100% of human genes, mountain gorillas have 98% DNA which survive in the montane rainforest and Virunga mountains. The word gorilla derives from Greek which means hairy woman. 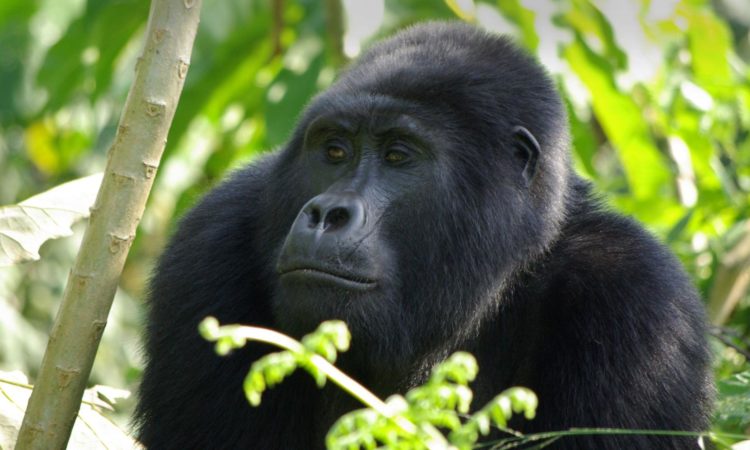 Gorilla trekking in Africa is one of the biggest Amazing tourist’s activities that has sold tourism industry of these three Countries.

Bwindi impenetrable national park is located in south western Uganda consisting of four sectors where mountain gorillas are habituated from. Gorillas in Bwindi live in Sectors park namely Buhoma in the north, Ruhija in East, Nkuringo in the south and Rushaga in south altogether comprising of 13 gorilla families and Mgahinga gorilla national park sits is the south western part of Uganda is habituated with 1 gorilla group called Nyakagezi which are open for gorilla trekking activity.

In Rwanda, Gorillas are be habituated in 11 gorilla groups which were opened for tourism that is Susa gorilla group, Sabyinyo, Amahoro, Agashya, Umubano, Hirwa, Kwitanda, Karisimbi, Ugenda, Bwenge and Titus.

The habituated mountain gorillas are gorillas that are already trained to get close to the presence of humans without any danger to them. Gorilla families are headed by a silverback, a mature male who select places for the family to eat and sleep, silverback weigh up 120 kilograms. Generally, a gorilla is a gentle species that is considered to be highly intelligent which is observed using tools like other great apes and communicating using vocal sounds.

Gorilla trekking in Africa in the three countries of Uganda, Rwanda and Democratic Republic of Congo has contributed a lot to tourism hub to each of the above mentioned countries in a way that leading to be the top visited destination in Africa because of these great apes and a number of tourists do engage in this emotional activity thus leading to increase of tourists on the daily basis in each country.

Gorilla trekking in Africa is the most and best enjoyable activity in the continent of Africa that has made foreigners to visit these endangered mountain gorillas in their natural habitat. This exciting experience starts early enough in the morning. After tourists breakfast, they will be given packed lunch because you never know the time spent in the wilderness. Our guide will be able to drive you to the park’s headquarters on time for a short briefing about gorilla trekking. Later you will meet a ranger and guide who accompanies you to the forests trailhead.

It takes 2 to 8 hours looking for these great apes since they keep moving from place to place looking for food and once they are found tourists will be given one hour to stay with them observing about their lifestyle, the way they feed, behaviours, playing, displaying their nests for night use, grooming  as well as taking photos with your clear camera and as one is trekking, they have the highest chance of seeing number of bird species, tree species, other primates and mammals. This is such a beautiful experience in the wilderness with human-like endangered species. And according to gorilla trekking in Africa, there is a maximum of 8 people allowed to participate in the trekking experience.

However, tourists cannot trespass in the natural habitant of gorillas without holding gorilla permits. Possessing the gorilla trekking permit is the only way that allows travellers to be able to access one of the gorilla families in above mentioned national parks though costs are different in every national park. Tourists are advised to book for their gorilla permits in advance like 5 to 6 months ahead of your arrival on gorilla tour destination and you should be extremely careful when your booking  for the permits through tour company/tour operator or even directly to tourism body that governs the national park. To note, in Uganda tourists can book directly to Uganda wildlife Authority ‘’UWA’’ or tour operator, Rwanda gorilla permits can be booked from Rwanda Development Board ’’RDB’’ and in Congo, gorilla permits can be booked from Virunga park headquarters inside Virunga national park.

How much is gorilla trekking permits in Uganda, Rwanda and Congo?

When is the best time to see mountain gorillas in Africa?

Fortunately, gorilla trekking can be conducted throughout the year in these three countries Uganda, Rwanda and the Democratic Republic of Congo but sometimes there are some changes of weather that are categorized in two seasons experienced by these national parks in which these endangered mountain gorillas inhabit. The majority of tourists prefer mostly visiting the natural inhabitant of these great apes from June to September and December to February when the forests trail heads are drier. You can visit Bwindi impenetrable national park all year around though in the lower season and the gorilla permits to access the park are cheaper compared to Rwanda’s gorilla permits.

Where can I go for mountain Gorillas Trekking in Africa?

In Africa, gorilla trekking can be done in only three countries that is Uganda, Rwanda and the Democratic Republic of Congo and never be deceived that Tanzania and Kenya can see mountain gorillas these two countries are good for wildlife safaris, not primates.

Rules considered before embarking for gorilla trekking in Africa.

Below are some of the Gorilla Trekking Rules that tourists must observe to have a successful trek:

What to carry on Gorilla tours?

Where to stay? (Accommodation Facilities)

Tourists like choosing the best accommodation but depending on how much you can afford and this differs on accommodation’s facilities ,location ,services and food composed in luxury ,mid-range and budget  in each of gorilla tour destination among the three countries ,in Bwindi national park and Mgahinga gorilla national park of Uganda tourist can sleep in such lodges with great viewing and beautiful lodges such as Buhoma Lodge, Silverback lodge ,Gorilla forest Camp, Clouds lodges, Gorilla safari lodge, Rushaga Gorilla Camp ,Climbing Lion Tree House ,Bwindi Forest Lodge ,Nkuringo gorilla lodge and many other nice lodges ,in Volcanoe national park in Rwanda tourists can sleep in nice lodges or evening by camping.

Carrying out Gorilla trekking in Africa i.e. Uganda, Rwanda and the Democratic Republic of Congo is a gorgeous experience that everyone should not miss out on when on an African Safari Tour.