Mount Gahinga is one of the 3 mountains in Mgahinga National Park and one of the 8 Volcanoes that make up the Virunga Mountains. The Virunga Mountains cut across Uganda, Rwanda and the Democratic republic of Congo. The mountain is a dormant Volcano though little is known about the last time is erupted. It is the smallest of the 3 mountains in Mgahinga National Park which is the reason for its name translated in the local language to mean a small pile of stones. The mountain sits between Mt Muhavura and Mt Sabyinyo and borders Uganda and Rwanda, with its biggest part in Uganda. 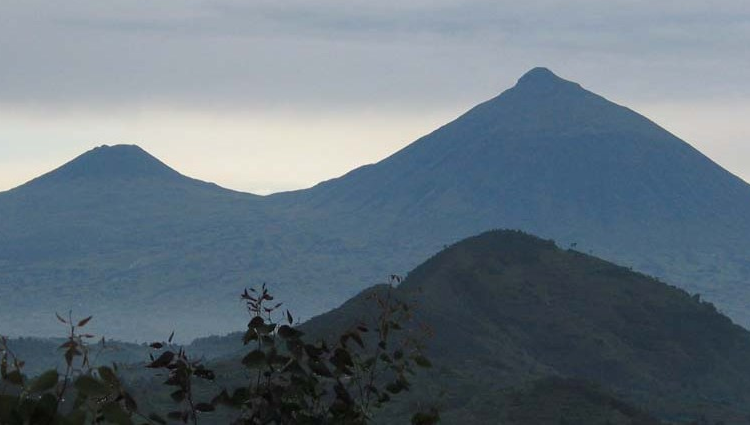 Because it borders Uganda and Rwanda, Mount Gahinga found in south western Uganda in Kisoro at the edge of Mgahinga National Park.

The mountain’s height is estimated at 3473 meters and its peak is a swampy caldera which is 180 metres wide. Mount Gahinga has afro- montane vegetation with Bamboo covering its slopes and this vegetation makes a perfect habitat for the endangered mountain gorillas that live and roam in Mgahinga National Park. The mountain also has several other primates living on its slopes that include golden monkeys, blue monkeys, vervet monkeys, colobus, and baboons. The forest on the mountain is also a hub for several bird species including the endemic Albertine species.

Mgahinga National Park is named after Mount Gahinga and the park is known for mountain gorillas, its beautiful scenery and the hiking experiences on all its three mountains.

Most hikers especially first-time hikers in Mgahinga National Park, normally hike mount Gahinga because it’s the easiest to climb, the smallest and shortest of the three mountains with considerably trekkable trails compared to the other mountains. That said, the mount also has some steep points so someone has to be quite mentally prepared and physically fit to take on this hike.

The entire hike experience to this mountain will take a hiker about 6 hours to complete of course considering a person’s fitness, determination and also the weather plus a few other things.

The hike to Mount Gahinga will start at 7:00 am at Mgahinga National Park offices, where hikers will be briefed about the hike and the hiking guidelines then assigned a ranger/guide who will take you on this trek. During the briefing session, you will learn more about mount Gahinga, its history, its significance and other facts about it.  Its at this point that you will be given walking sticks for the hike too.

On the hike you will go through the forest on the slopes as you make several stops on the hike to rejuvenate, catch your breath eat your snack and enjoy the several views of that point.

The start point of the hike will take you the afro-montane forest, unless it’s the rainy season when the forest is soggy, the hike through the forest is very easy; it’s a walk in the park. The forest offers you the perfect opportunity to sight the wild animals that live in the forest especially the gorillas and monkeys. The forest is said to have buffaloes that are rare to sight and also when sighted can be a danger to you.

You’re normally done with the forest part in under an hour, and then you start on the steep points of the mountain that have numerous caves all the way to the peak. When you get to the pick you will see the swampy caldera that has vegetation like alchemilla.

Unlike the other peaks of mount Sabinyo and mount Muhuvara that give you an extensive view of the Virunga Massif area, the peak at mount Gahinga gives you views to mount Muhavura and Mount Sabinyo and the surrounding areas. Also, the peak is not as cold as the other mountains so you can stay up there to up to an hour especially during the dry seasons; story may be different during the rain seasons though.

After the peak experience, you will slope down the mountain and back to your accommodation, going down the mountain is not hard at all only that there are high chances for you to slide and fall, so make use of the handmade ladders provided and the walking sticks. The hiking permit to Mount Gahinga will cost you 75 US and like for any other hike, you need the right hiking attire like hiking boots (waterproof), long sleeved clothing, hats, gloves and other things you deem necessary; don’t forget your camera to capture the memorable moments.