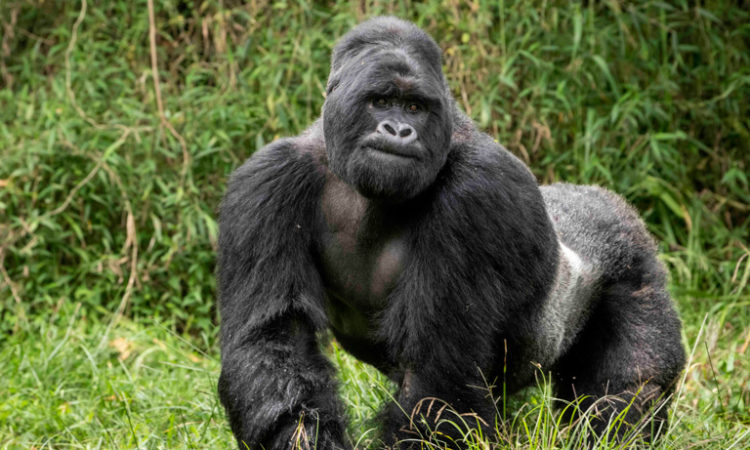 As you go for your trekking experience, you may have a couple or a multitude of questions about mountain gorillas that you will be glad if someone answered to help you have a more informed trek and experience. Well, you don’t have to worry, because in this article we are going to bring you up to speed with some quick facts about the mountain gorillas that are applicable while you’re trekking in Uganda or Rwanda.

Mountain gorillas share about 90% DNA with humans meaning mountain gorillas are actually close relatives to humans, so on your trekking experience you will notice that gorillas have some similar features with humans. Some of those similar features include laughing, playing, crying, doing some handy stuff like handling objects, breasting feeding and carrying their young among other things.

The mountain gorillas also have muscles like humans; their muscles are mainly in their arms which compliments the large and highly strong arms. Unlike humans who just show off their muscles the gorillas use their muscles to gather food and to defend themselves against danger. The arms also support the gorillas’ movements because mainly walk on their knuckles

Mountain gorillas then use their legs mostly the feet which are tough to climb the trees, walk on hard surface like rocks and thick grass.

All gorillas are herbivores which means the mountain gorillas since they live in forested mountains feed mainly on leaves, bamboo, bark and in some cases fruits.  Mountain gorilla families normally feed together at the same time with the silverback eating first because his, the head of the family, plus he leads in the hunt for the family’s food.

Mountain gorillas are hairy meaning they have a whole body covered in black hair apart from the arms, legs and the face. Their hairy body helps the gorillas to keep their body temperature regulated and the hair also fights off insects from the gorillas. Their hairy bodies help them to adapt to cold temperatures that are characteristic of the high altitude they live and breed in.

Like Humans the mountain also communicate with each other, though not with words, the gorillas use some specific vocal sounds to reach each other, they have several sounds and each sound indicates something different. When they are together they will communicate with the bodies with unique expressions that will show their needs, wants and feelings to other individuals.

Mountain gorillas are very peaceful animals and will rarely attack you or engage in fights unless it’s absolutely necessary for their safety; normally when they sense danger they walk away to trouble and unnecessary fighting.

However don’t let their peaceful nature fool you, because they are strong and fierce fighters, when you get on their wrong nerve they will fight you till death or leave you with fatal injuries. They will trample on you several times; throw you around, step on you among other things.

Like Humans the female gorillas get pregnant with one child at a time and give birth after 8.5 months of gestation. The mothers normally breastfeed and closely nurture their young till they are five years; some cases five plus others less than five but at five, most gorillas are presumed not to be as young any more.

Mountain gorillas are shy animals, thus can easily run away when they see a person, however, all the mountain gorillas that are visited annually in Uganda or Rwanda have been habituated; which means they have gone through a process of familiarising  with humans so can stay still in the presence of humans.