Volcanoes National Park is a national Park in East Africa’s smallest country Rwanda. The park is located northwest of the country and covers a total area of 160 km2 that consists of a rain forest and 5 virunga massifs together with a rich mosaic of montane ecosystems, evergreen bamboo forest, open grassland, swamp. The park is found in the Virunga region that cuts across Uganda, DRC and Rwanda and this region consists of 8 volcanoes that are:- 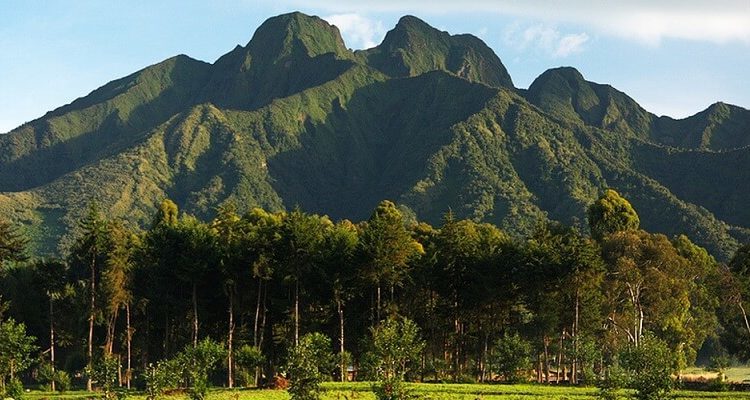 Volcanoes National Park Africa, apart from being part of the Virunga massif, its known for being home to the rare, unique and endangered mountain gorillas as well as other primates like the golden monkeys. This Park was also the base primatologist Dian Fossey from 1966 to 1985 when she was murdered; Dian Fossey was buried in the park and her grave is situated in the park.

Volcanoes National park is 2 to 3 hour drive from Rwanda’s capital Kigali in Musanze Town that was formerly known Ruhengeri. You get to the park by road either by private vehicle or public means which is by bus; though you should know the public means ends in Musanze it doesn’t reach the Park’s entrance or offices in Kingi. Kingi is about 15 to 20 mins from Musanze.

Volcanoes National Park is known for a number of tourist activities that include:-

Mountain gorilla trekking is only for healthy persons 15 years and above and normally starts at 7am, going on till 12pm.

Similar to mountain gorilla trekking, this time trekkers go through the rain forest to search and find the unique golden backed monkey with a bright rufous-red back. These monkeys are spread out in the forest and can be found there any time of the year. Golden monkey trekking in volcanoes National Park is at a permit fee of 100 USD.

Volcanoes National Park has five volcanoes, four of which are hiked all year round together with the Dian Fossey grave site. On the different hikes, hikers are treated to spectacular views of the Virunga region, Rwanda the land of a thousand hills, the East African region as well as sighting numerous wild life like buffaloes, monkeys, warthogs etc. These sightings are both on top of the hike and on the hiking trails and hikers climb up to their top points.

Apart from Mount Karisimbi that is a two day hiking experience, all the other hikes are one day and are all done as stand-alone safaris.

With over 200 bird species in Volcanoes National Park, the park is a birding hub for travellers that enjoy viewing birds like the Ruwenzori turaco, ground robin, francolins, red faced woodland warbler, and the Archer’s ground robin among other birds.

Birding in the park is done as a top up activity to trekking and is done throughout the year.

The caves are natural underground chambers in the hills with space big enough for persons to enter and walk through. Tourists normally take walks through the caves to experience the different facets of the caves and they also enjoy the mystery the caves give.

The touring of these caves is normally done as top up activity to trekking or hiking.

The Ngezi trail is a scenic Crater Lake found at the foot of Mount Bisoke and it gives you a refreshing 4 hour walk along the trail where you can see several bird species and monkeys as well as a glimpse of the entire Virunga region.