The Golden monkey is one of the many endangered primates that live naturally in the Virunga Massif distributed among Uganda, Rwanda and DRC. The animals formerly classified as one of the subspecies of the blue monkey because of their similarities but currently classified as one of the species of the old world monkey the golden monkey is a monkey with a rare appearance of a golden orange like colour which is the reason behind the primate’s name. The monkey’s upper back and flanks have patches of the golden orange colour that is unlike other monkeys. 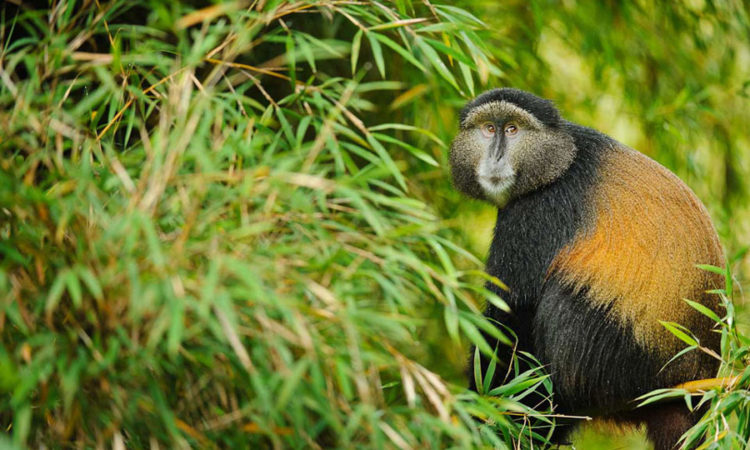 The golden monkey is uniquely small and beautiful with a golden- orange bright coloured fur. Just like other monkeys, they are social beings, very playful and fast; they live in groups of 30 individuals or more and they stay close together even in hunting for food or moving to other locations; these groups are normally led by an alpha male. They show their emotions without verbal utterance only with gestures or postures among other things. They also create strong bonds with each other by several unique sounds that they make; these sounds even help when adults are creating bonds with their young ones or even in warming others against danger or predators.

In very high elevation areas you will normally find groups of 3 or 4 individuals of golden monkeys nesting together. The golden monkey will move around during the day in such for food, but will normally come back to a particular place to sleep and rest; these places are normally in bamboo plant tops and at least 2 or four golden monkeys sleep there at the same time. Their sleeping beds, nests or areas are made of weavings from the bamboo plants.

Unlike other monkeys, Golden monkeys will keep to their habitats which are a necessity for their survival. The golden monkeys live in mountainous dense bamboo forests normally in the high elevations which is why they are small in size compared to other monkeys. Because the golden monkeys adapt more in high elevations of the mountainous bamboo forests and feed mainly on bamboos; the monkeys can hardly survive in captivity hence you won’t find them in Zoos.

The monkeys stay in one place for a long time and but will move around from place to place in search for food and return to their nesting place after the day. They are more active during the day and use the night to sleep.

A group of monkeys is led by an adult male though the females are the ones that defend the group’s territory; because normally males leave the group after a certain season. The females also entice the males to join their groups though the males normally mate with all the females in the group. The monkeys have a series of communication mechanisms they use to express themselves while on heat as the females show alertness and submission to stimulate the males to fight non-verbally to push away other males from the female of their choice.

The golden monkeys give birth to one offspring at a time after a gestation period of 5 months. The young ones at birth have fur all over their bodies and open eyes. The mother will normally lick the young one to clean them up and also eat the placenta. In the first months of birth the mother will exclusively nurse the young one and as the months go by the young one will become partially independent of the mother and will become fully independent when another young is born which usually happens at between 2 to 3 years of age and the males will drift away from the group when they are sexually mature at this age. This breeding happens during particular times of the year.