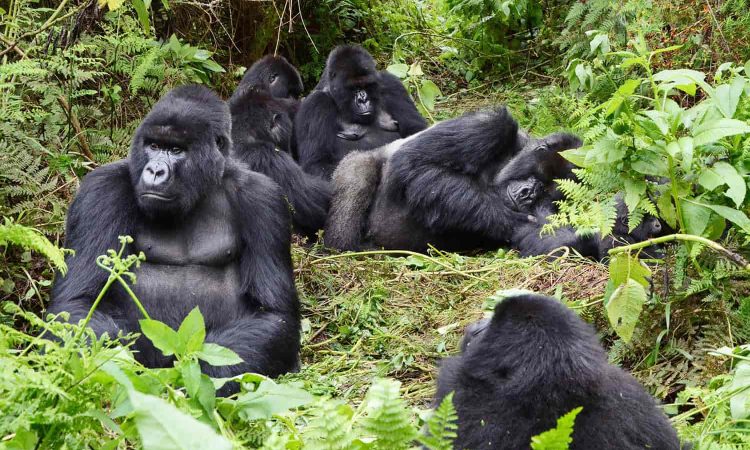 This is not the first time gorillas are crossing borders to nearby national parks; in fact the current Nyakagyezi family in Mgahinga used to trek back and forth to the Virunga mountains in the DRC, and it was quite hard to trek it for some time because you would never know where it be (Uganda or DRC).  It’s good to note that this family has since settled in Mgahinga National Park and can be trekked their as the only Mgahinga National Park Gorilla family.

If the Hirwa family decides to migrate back to Rwanda, it will leave Mgahinga National Park with only the Nyakagyezi family for trekking and it will reunite with the other 9 families in the Volcanoes National Park Family.

However you should know at this time, It’s too early to tell what will happen because the reasons for the migration are not known, whether it’s a habitat issue or just a season or climate change, we don’t know, meaning wildlife experts are not able to make accurate predictions of the gorilla family’s future or rather are still carrying out research to establish the causes and what the future holds for the gorillas.

Though if the former scenario happens, Uganda Wildlife Authority and Rwanda development bank will have to come to an agreement to share the revenues that come from trekking the Hirwa gorilla family in Mgahinga National Park, Uganda. But as for now it’s too early to tell.

The Hirwa gorilla family has been known to roam the Virunga mountain conservation area for a while, so its migration to Uganda is not so much as a shock. Hirwa which means lucky one in Kinyarwanda was the named given to this family after it formed from a breakaway.

A silverback in the Susa family broke away from the family with two females moving to Mt. Sabyinyo where he continued to attract more females and now they are 20 members in the family.

Since mountain gorillas cannot be restrained or kept in a zoo because their survival is mainly based on its habitat so normally the mountain gorillas move freely within the Virunga massif that cut across 8 volcanoes in Rwanda, Uganda, and DRC.

As stated earlier, reasons for gorilla migrations are not known though it’s now becoming a common occurrence especially among the mountain gorillas living with the Virunga massif. Primate scholars speculate that the gorillas move to look for food or move when they are running away from intergroup competitions for reproduction in families. But all these are still speculations the real reason is yet to be established after thorough research studies are done.

Mgahinga National park where Hirwa family has migrated to; sits on a 34 sq km area that covers the slopes of Mt Sabinyo, Mt Gahinga and Mt Muhabura in the south west of Uganda north of Rwanda.

Mgahinga National Park was created to protect the endangered primates and the park is part of the three parks that form the Virunga conservation area distributed between DRC – Virunga National Park, Uganda, and Rwanda – Volcanoes National Park. The park though commonly known for its mountain gorilla family, it’s also a natural habitat for golden monkeys, a number of bird species plus wildlife including the bushbucks, the giant forest hogs, leopards, spotted hyenas, e.t.c.

What you will find interesting is that the name Mgahinga comes from the Kinyarwanda word Gahinga; interpreted a pile of volcanic stone heaps that were piled up to leave land for farming after they are washed down people’s farms; so it’s not surprising that the Hirwa family gravitated to Mgahinga National Park.

You can plan to visit Mgahinga National Park to see either or both the Nyakagyezi and Hirwa gorilla families and also engage in other activities in the park including golden monkey trekking, hiking to the top of the mountains, bird watching, mountain biking, nature walks, community encounters like the Batwa Trail experience, e.t.c.