Gorilla Families in Rwanda are the groups in which the gorillas live and groom each other. These are habituated gorilla groups. Rwanda is quickly joining the lists of the top tourist destinations in the world because of its primate diversity that has made the country a top primate safari destination in Africa and the world. The primate safaris in Rwanda include golden monkey trekking, chimpanzee trekking and the most sought after primate safari is Gorilla trekking. 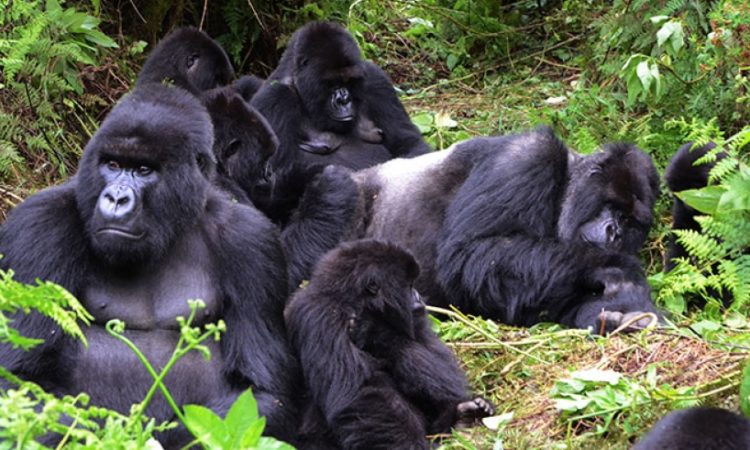 Volcanoes National Park, the oldest national park in Africa is located in the northwestern province of Rwanda in Ruhengeri Musanze town and the park covers an area of about 160 sq kilometers lying on the great Virunga Conversation Area that spans across the 8 Virunga Volcanoes including the Volcanoes in Rwanda.

Volcanoes National Park is accessed mainly using road transport; from any location in Rwanda. From Kigali specifically; Kigali International airport, the distance is approximately 116.3 kilometers to the park and it’s a two to 3-hour drive from Kigali International Airport to Volcanoes National Park. The time includes stops and takes into consideration the provided traffic regulations of the nation of Rwanda.

Mountain gorilla trekking safaris in Volcanoes national park take place all year round, with tourists flocking the park to have a glimpse at these endangered animals. The number of tourists trekking the endangered gorillas reaches maximum during the dry seasons; because in the dry seasons the mountain trails are dry and easier to trek; so if you plan to trek in dry season you may need to book you permits quite early about three months in advance.

A gorilla trekking permit costs 1500 USD and this permit gives you access to one of the habituated gorilla families in the park that you interact with for one hour on your trek. Permits are acquired at least 3 months in advance and are only valid for the particular day of trekking.

All trekked mountain gorillas in Rwanda’s Volcanoes National Park are habituated and there are currently ten habituated families in the park. Each family is unique and gives you a personalized experience on your adventure, and each family is found at a different location on the Volcanoes, depending on the gorillas’ preferences, adaptation mechanisms and food availability, the families include:-

Ugyenda gorilla group: Ugyenda gorilla family is a group of 11 gorilla individuals with one silverback, this family is one of the easiest groups to trek in volcanoes national park as it is found on mount bisoke. Ugyenda group derives its name from a local word meaning departure.

Hirwa gorilla group: This is a tricky family among all the gorilla families in Rwanda. Hirwa gorilla group is a family of 12 members with one silverback; this family is an exceptional family because it has twins. Hirwa family lives on the slopes of mountain sabyinyo.

Hirwa is derived from a Kinyarwanda word meaning a lucky one.

Sabyinyo gorilla group is a family of 12 members with two silverbacks, this group lives and is trekked on the slopes of mountain sabyinyo and it is from this volcano where it derives its name. Mountain gorillas of this family also wander off to mount Gahinga.

Susa gorilla group: Susa gorilla group is the largest gorilla family in volcanoes national park, this park consists of 29 family individuals with 3 silverbacks. This group was first discovered at around Susa River that is why it was named Susa group.

On your mountain gorilla trekking experience, you will be sure to interact with either one of these ten families in its natural habitat. Be sure to capture as many memories as you like but to also follow the provided rules for trekking, that include:- but not limited to keeping 7 meters of distance between the Gorillas and you, don’t feed the gorillas, don’t trek while you’re sick, always follow the instructions of your ranger, stay within your group among other things.